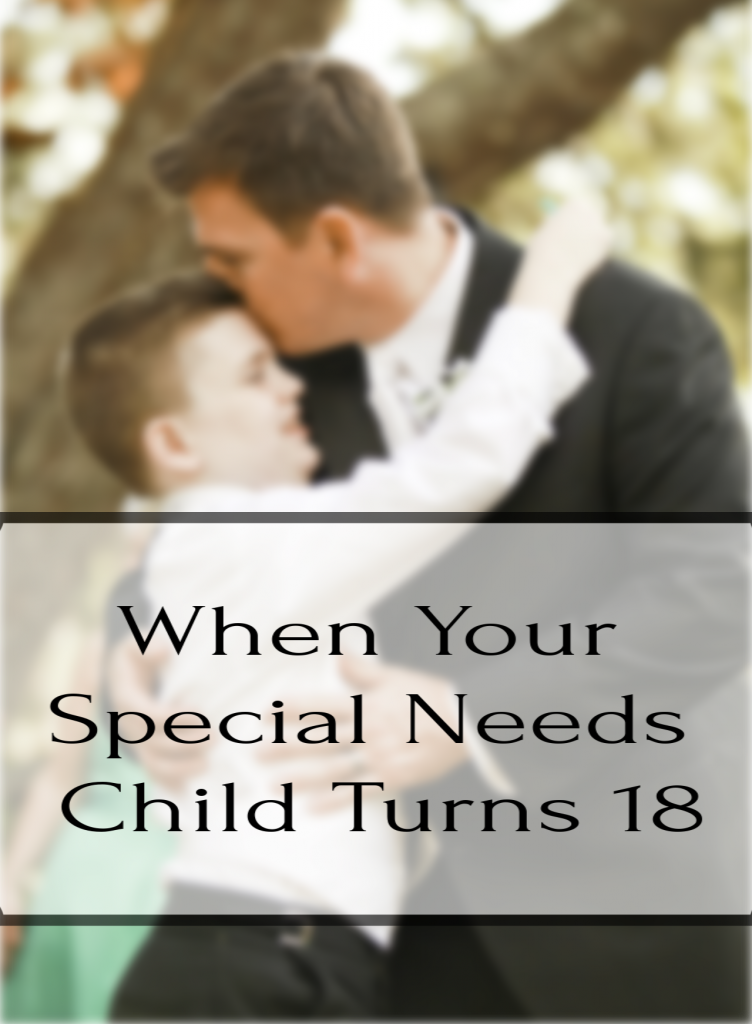 When we’re young, there are certain ages that we look forward to.  Like 13 when we become a big teenager, 16 when we could finally drive a car, and 21 when we could drink… legally.  Those with special needs usually don’t celebrate these big milestones.  The big ones for them are 18 and 21/22.  You see at the age of 18 they legally become adults and decisions must be made.  At 21/22 (depending on your state) public education ends and they must officially transition into adult life.  Now there are some cases, depending on the severity of the child, where they actually graduate sooner than 21/22.  But that’s not Ry, he’ll be in the system until he turns 22.  We aren’t there yet, but the whole turning 18 has been a big transition for us as his parents if not for Ry himself.

As I said, when kids turn 18, they are legally considered adults and while that really doesn’t impact the average teen, it most certainly does for the teen with special needs.  Everything changes – from IEPs to insurance and medical care.  Here’s what we’ve done with Ry so far, what we’re still working on and what we still need to do.

Guardianship was the biggest decision we had to make when Ry became of age. Again, it really depends on the severity of the child – on how well they can make decisions for themselves.  In Ry’s case, he is completely unable to communicate his desires as far as basic self-care goes, much less make choices for himself when it comes to medical care, financial decisions, living situations, etc.  Guardianship was a no-brainer for us.  There are a few different options available for those with special needs though – including partial guardianship or power of attorney.  Again, it just depends on the child’s level of cognition.  The biggest impact of this decision has been with Ry’s healthcare and insurance.  Because he is now over 18, he is supposed to be in charge of his own healthcare – appointment, referrals, etc.  Of course, he can’t do that so having the guardianship has made it so that I can still take care of those things for him.  Although it has been a hassle with sending the paperwork to prove it.

Gaining guardianship wasn’t that difficult.  Eric and I went down to the courthouse to fill out the application for a fee.  In the application we had to name secondary guardians in case something was to happen to us.  We also had to list Ry’s siblings.  All these people were sent a copy of the order of intent.  This included Ry himself.  Ry also had to be summoned to court – he had to be served by the Sheriff’s department in person.  Seriously!  We ended up going to the Sheriff’s office to pick it up because we couldn’t settle on a time for them to come to the house with school and all his therapies.  After taking care of that, Ry was appointed a guardian ad litem who was a lawyer that came to the house to interview Ry (as best she could) in order get a general idea of his competency.  We then went to court where we appeared before a judge with the guardian ad litem and were given guardianship.  The whole process took a month or two.  We were so glad that we decided to take this step first because if we hadn’t, it would have made the next step difficult.

Next, we applied for Supplemental Security Income (SSI) on Ry’s behalf.  Some special needs children qualify for SSI before turning 18 if they’re parents make under a certain amount.  Once they become an adult though, parent income doesn’t matter.  I was glad we had the guardianship already done because Ry is non-verbal and couldn’t give consent for me to speak on his behalf during the interview.  The whole process takes several months.  Right now, we have two appointments for him to be evaluated proving his level of severity; one for speech and one with a neurologist.  The next step will be to get him a checking account in his name.

What I’m working on right now is a Letter of Intent in case anything happens to Eric and me.  The letter needs to include things like Ry’s abilities, daily schedule, support needs, benefits and services he receives and who should take over guardianship.  It’s not something that I can do in one sitting.  A lot of thought and planning needs to go into it.

Things I didn’t think of that we still need to take care of for Ry is getting him a state ID and registering him for Selective Service.  I only recently caught on to the state ID and smacked myself in the head for not thinking of it sooner.  I know that it would have been a whole lot easier to get his military ID renewed if we had a state ID already.  It’s a lot easier than carrying around a birth certificate.  As for the Selective Service thing – I didn’t know that you still had to register even with special needs until recently.  Oops!  If a draft is ever implemented, he will have to go for a physical and will be disqualified for service then so it’s really not a big deal but still.

We are also going to be looking into a special needs trust fund for Ry.  This trust ensures that he will be taken care of financially when Eric and I pass without affecting his SSI benefits.  The catch with this one though is that we will need to hire an attorney that specializes in these types of trusts.  His SSI will have to pay for that.

When Ry turns 22, he’ll be out of the public education system and we will have to look at alternatives for his social interactions – and a break for mom.  We’ll also have to address his insurance needs at that time.  Right now, he still falls under our insurance as a dependent because he is still in school.  Once he’s out of school however we’ll need to look into Medicaid for him.  I’m looking into what other services he’ll be eligible for by then too.  Thankfully, all that is still a couple of years away, so we have time.