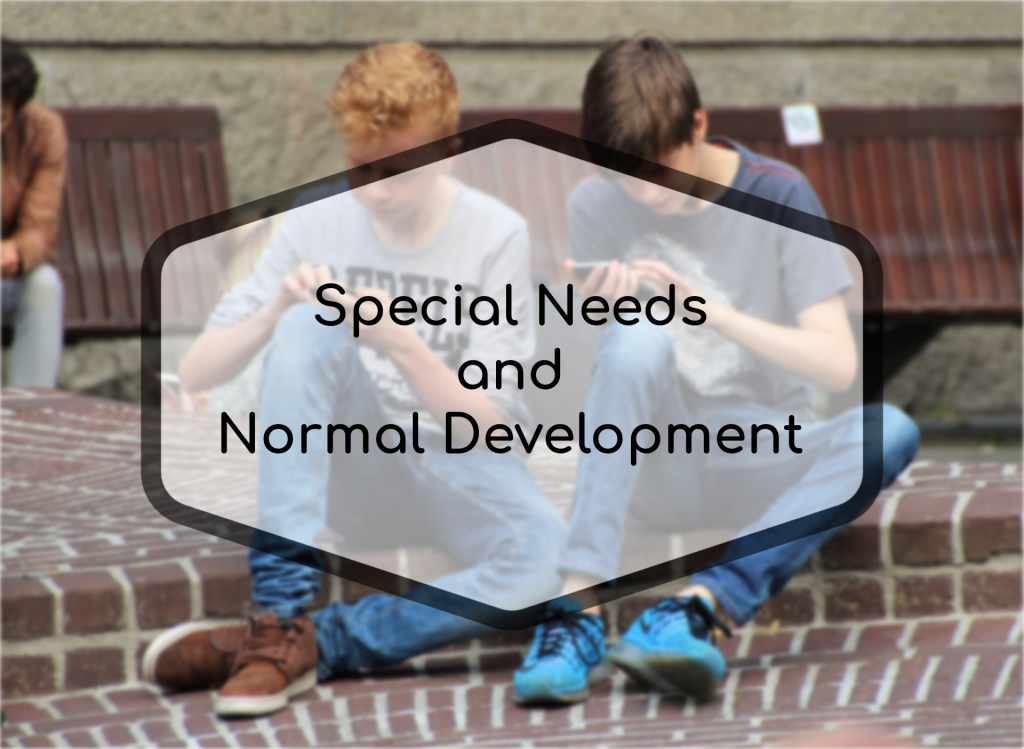 When you have a child with special needs, it’s easy to only see how different your child is from “normal” children.  While they are young and developing, the usual milestones missed are glaringly obvious.  I have come to realize, though, that there are actually some areas in which our special children follow the norm.  Usually, I find it quite humorous, even when Ry is acting like a stubborn mule.

I first started to notice this age appropriateness while working with Ry’s special needs Sunday School class.  One of the girls, who was also non-verbal, had turned 12 and shortly afterward began to take much more interest in how she looked.  Her mother began to comment about how much she insisted her hair be styled and had started picking out very girly outfits to wear, usually skirts.  She also decided that she had to start carrying a purse with lip balm in it.  All of this very appropriate for her age.

This behavior made me think about Ry and how he had been acting or reacting.  I realized that he, too, was beginning to assert himself more and starting to express his desire for independence to an extent much like his twin brother.  He became much more stubborn about doing things he normally would comply with without hesitation, like getting dressed in certain clothing.  He also started demanding more forcefully what he wanted whether it was food, a drink or a certain toy, etc. He was around 11-12 as well.

I noticed other special needs children in our circle and realized it was happening all around us.  The children were acting as “normal” kids their age would act to a certain extent.  Being clingy as toddlers.  Asserting independence as tweens.  It was fascinating and comforting in a way to know that even though our children are different they are still very much the same in some regard.

Looking back to when he was younger, I see the same progression.  He never went through a terrible two phase, but he did start to become interested in things going on around him as well as the family when other children would.  He started testing his boundaries at the appropriate age.  He started understanding that others have feelings at an appropriate age.  The list goes on.   I’m not sure why it took me so long to notice.  It’s one of those things we crave as special needs parents – normalcy.

As Ryland has grown, our daily snuggle time has gone away.  He prefers to stay in his room most of the time with his Kindle watching YouTube videos.  Again, totally appropriate for a 19-year-old.  The only time he comes to me on his own now is if he needs something to eat or drink; or if his Kindle isn’t working properly.  I have to make him spend time with me doing a puzzle or watching a video together.  He’s growing up.  He still needs me to help him do most of his self-care like bathing, dressing, shaving (yes, that’s a thing we must do now) and changing his pullup, but he has definitely shown that he still wants to be his own person.  In a way, it makes me sad.    I miss my little boy who loved to cuddle.

As he grows, I realize that there will come a time when his leaving the house to live in a group home will also be age-appropriate for him.  He may actually want to leave home and live elsewhere.  I’m not anywhere near ready for that.  My heart isn’t ready to give him up to such a big unknown just yet.  I’m in tears as I type this just thinking about it.  At the same time though, I know that it will be a natural progression for him.

Even though there is plenty that sets our special needs children apart from “normal” children, it’s comforting to know that, in some way, they are normal, too.  As always, we find the little things are sometimes the things to celebrate the most when it comes to Ry.  Right now, I’m happy that he’s in his room watching YouTube videos on his Kindle while his brother is in his room playing video games on his computer.  It means all is right with the world.

One thought on “Special Needs and Normal Development”