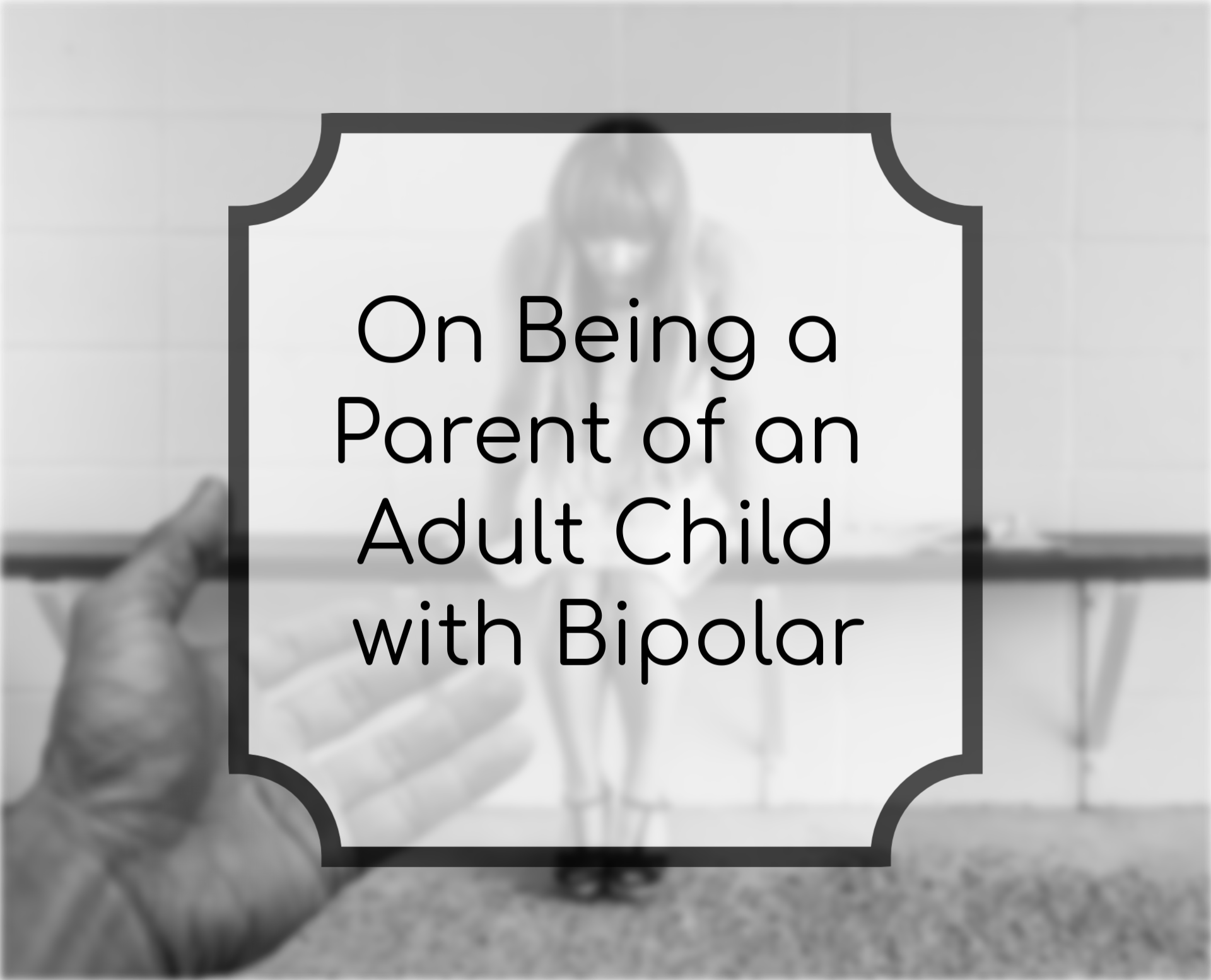 My daughter, Paix, and I have been at odds a great deal lately.  When trying to discuss her mental health, we usually end up in an argument where we both walk away angry and hurt.  I’m afraid she thinks I don’t love her or, worse, don’t care at all, but it gets so frustrating dealing with her sometimes.  Paix has been diagnosed with Bi-polar II with psychotic features as well as ADHD and Generalized Anxiety Disorder.  Her bi-polar is such that she can cycle through several emotions in a day.  It’s called Rapid Cycling.  I know for her it is exhausting, but it can be just as exhausting being her parent.  I’d love to say that I am supportive 100% of the time.  I would love to say that I am the perfect parent who is always there for her when she needs me.  The best I can say is that I’m there when she needs me the most.

Let’s back up a bit. We knew Paix was having issues with depression when she was in high school and sent her to counseling.  When she started college, she started cycling between depression and hypo-mania (a mild form of mania, marked by elation and hyperactivity).  Then the psychotic episodes started showing up.  During one particular incident, she saw roaches coming out of a hole in her head and used her blankets and pillow to try to plug it.  Needless to say, she had to leave school.

Paix started seeing a psychiatrist who put her on a few medications to stabilize her, but she would not take them as prescribed.  As a result, the meds helped but did not work nearly as well as they could have.  I finally convinced her that it was imperative that she take her meds the way she was supposed to.  She started feeling better and decided to make a fresh start in Florida.  Even without health insurance, she found a psychiatrist there who kept tabs on her meds.  She was doing well until she suddenly wasn’t anymore.  She crashed and hard.  She got to the point where her psychiatrist recommended that she go into a treatment facility or move back home.  Since she didn’t have insurance, the treatment facility was out of the question.  So, home it was.

It was obvious that Paix could not get a job right away.  Our first priority was to get her health care insurance.  After about a month, we got that done.  Then came the task of getting her a Primary Care Physician and a psychiatrist.  A couple months later that was secured.  She began psychological testing and genome testing to find the best combination of drugs for her.  That’s where we are now.  She goes next week to hopefully get her first medication in months.

It’s been hard since she has been back.  We knew it would be a big adjustment for us all, but I didn’t realize just how much adjusting would have to happen – especially for me.  The house had been quiet before Paix moved back in.  We had a family flow that was peaceful for the first time in years.  When Paix came back all that was shattered.  Paix is a whirlwind of movement and noise.  It is constant and can get very loud.  She talks – a lot!  About everything under the sun – anything that comes into her head.  She over analyzes everything and wants your opinion on it as well.  This happens even during her depressive episodes and can be downright nerve-racking when she is manic.  Blame it on the ADHD I guess.

So much emphasis has been placed on Paix and getting her well and functional again that I, as her parent and current caregiver, had to once again put my needs to the back burner.  It is already a juggling act with Ry and his appointments and care in general.  Paix stays up very late at night to help with Ry, going to bed usually around 3am, causing her sleep cycle to be off from the rest of the family.  While I’m grateful for the help with Ry, I am now concerned that her sleeping in so late in the morning – usually afternoon – is not the best thing for her. All the routines changed, and I’ve had to re-vamp my whole self-care regimen in order to accommodate yet another child in need.

I’ve sacrificed for her to come home.  My craft room became her bedroom.  You must understand that my craft room was my place of solitude, of recharging, of peace, of purpose.  There was no hesitation in giving it up – Paix was coming home.  What I didn’t realize though was how profoundly it would affect me to give it up.  All my plans for my own future had to change pretty much overnight.

The financial strain of having her home is real too.  She still has car insurance and credit card debt that she accrued while having to pay for medical care out of pocket.  Paix also has a bad habit of spending money she doesn’t have while in a manic episode.  She has been borrowing money from her brother which has caused me to be concerned for them both.  Thankfully, Aidan is learning to say, “No.”  She has been donating plasma to pay some of her bills, but there is still the amount of food she eats and her cats to be cared for.  It adds up – financially and stress-wise.

Living with an unmedicated bi-polar person is no picnic either.  Her mood swings can be like watching a tennis match in fast motion.  You never know which Paix you are going to be talking to at any given moment.  She may be calm, or she may be hyper and talking so fast you can barely understand her.  Or she may be depressed and talking about the most odd and depressing things.  It is a lesson in patience.

Paix has blinders on as to what she should be doing next.  She has been planning, but only for the long term.  Not the short term of what to do now to help herself feel better.  And if there is a plan there is very little action behind it.  It is so very frustrating to see your child suffering, knowing what they can do to ease that suffering, yet they won’t do it.  That’s why we end up fighting so much.  I get frustrated and she feels that I’m not listening.  She says she wants to get a job, go back to school and get back out on her own.  We want that for her as well, but there seems to be little effort in that direction.  I’m hoping that once she gets medicated her motivation will increase.

Being the parent of an adult child with Bipolar, I’m still working on figuring out how to juggle all these pieces to make them work for us all.  Hopefully soon – with Paix’s medication stabilizing her – we can get her to a more productive place where she can be the adult she is meant to be.  Until then though, I will continue to hold on for the ride and pray I can do it without losing my own sanity.