Bi-polar Disorder is a mental illness that is characterized by major mood swings.  That part is general knowledge and some people use it as a joke.  “Bi-polar much?”  But in our house, it is an all too real fact of life.  Paix was diagnosed as bi-polar with psychotic episodes just over two years ago.  Bi-polar is more than just mood swings though.  BPHope.com notes that those with bi-polar can experience addiction, hyper-sexuality, sleep problems, anger, impulsiveness, stress, anxiety, and memory issues along with the mania and depression.  Paix has struggled with many of these.  It is an illness that can debilitate financially and socially.  Holding down a job and finding friends that can truly deal with who she is has become increasingly difficult for her.  It is heartbreaking as a parent to see her struggle.  Whenever I get exhausted dealing with her moods, I remind myself that she must be just as exhausted if not more so.  It’s like riding a roller coaster that never stops.  We rarely know which Paix we are going to get on any given day – some days, at any given hour.  It wasn’t always like this though.

A study I recently read published by the National Institutes of Health stated that bi-polar typically manifests itself in early adulthood around the time that children set out on their own.  This was the case for Paix.  She has always had issues.  She was diagnosed with ADHD when she was six years old.  (I could write a whole other post about those adventures.)  We worked very hard to overcome the hurdles she encountered with her hyperactivity and lack of focus.  We were actually winning there for a while.  It wasn’t until high school that things turned darker.  My once gregarious little girl was gone.  She began to withdraw, and it was obvious that she grappled with depression, so we got her into therapy.  When she graduated and started college, things really got bad.

Paix had moved out of the house and was sharing an apartment with a couple of room-mates.  She was taking classes in 3-D animation at a local community college with hopes of transferring to SCAD (Savannah College of Art and Design) after receiving her bachelor’s degree.  After her first semester she started having more and more periods of manic behavior followed by serious bouts of depression.  It was also during this time that she had her first psychotic episode of which I knew nothing about until much later.  She has since told me about looking in the bathroom mirror and seeing roaches crawling out of a hole in her head.  She literally tried to stuff the hole with her comforter and pillows to stop the flow of insects.  It’s painful to think of her in that state.  I knew she was struggling and finally talked her into going back to her therapist, whom she had stopped seeing after she moved out on her own.  It was then that she was diagnosed with bi-polar and sent to a psychiatrist. 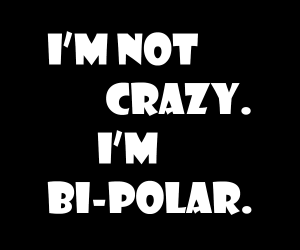 The psychiatrist immediately put Paix on medication which helped but, as her illness is prone to make happen, she felt she knew more than the professional when it came to dosing.  She would experiment with how many of each pill she would take and when, then would not discuss with her doctor what she was doing and wonder why she wasn’t getting any better.  The swings continued, sometimes violently.  (That’s not to say that she herself was violent.  One blessing in this is that she does not have the anger management problems so often associated with bi-polar.)  By the time I had finally gotten her to understand that she had to take her medications as prescribed, the lease was up on her apartment and her room-mates could no longer help with rent.  We made the decision that she should have a fresh start someplace she had always wanted to live – Florida.

My mother and step-father have a place in Florida and they agreed to let Paix stay there with them until she could find work and get a place of her own.  They set her up with another psychiatrist.  She took her medication like she was supposed to. She got a job and a nice little studio apartment by herself.  Things were looking up!  And then, all of a sudden, they weren’t.  She was having trouble making friends.  Having trouble keeping a job.  The psychotic episodes came back.  The depression was even more profound.  Finally, her psychiatrist recommended she come home because living by herself was too dangerous for her.  We were actually looking into treatment facilities but as she did not have health insurance we banked on the hope that the move home would help until she did.

That’s where we are now.  Baby Girl is home and is doing better.  She is still an emotional roller coaster but she’s more stable than when she was living alone.  She also has friends here she can hang out with.  We’re still working on the health insurance.  It’s kind of catch 22 with that.  She needs a job to afford health insurance, but she can’t hold down a job without the proper medication and she needs the health insurance to ensure she gets the medication.  She was working on getting Medicaid when she moved so has had to start that whole process over again.  The medications are expensive.  The doctors are expensive.  Health insurance is expensive.  But she NEEDS them all!  Right now, we’re paying out of pocket for her care.

Regardless of all of this, Paix is a fighter and is working very hard to stay positive.  She still has her dreams and goals of going back to school, pursuing her art career, even travelling to Japan.  My heart swells with pride when I look at her – how much she has overcome and continues to overcome.  Bi-polar is a ride I wish on no-one, but we’re making it.  One day at a time with our hands in the air sometimes yelling, “Weeeeeeeee.”