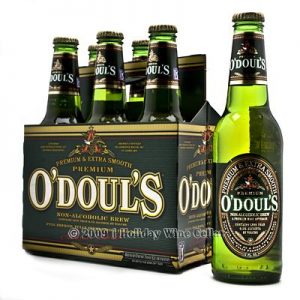 I have only been arrested once in my entire life.  Trust me – it probably should have happened a lot more, but I had an innocent face and was never caught.  When O’Doul’s first came out, it was strongly advertised as a non-alcoholic beer.  At the time of my arrest, I was not drinking.  I had been in AA for a couple of years trying to find other ways of coping with the depression.  So, when I went over to my friend M’s house with my high school sweetheart and they pulled out the coolers, I politely declined to partake.

We were all hanging out in M’s garage, shooting pool and talking.  It was all my closest friends from high school.  All males just so you know.  I was that kind of girl who was very picky about the females I associated with.  Girls are so catty!  We were all 19-20 years old at the time.  There wasn’t really a lot to do in our small Georgia town on a Friday/Saturday night so congregating at M’s had become a norm.  Anyway – M’s dad, Mr. C, who ran/owned several gas stations in town, innocently handed me an O’Doul’s saying that it was non-alcoholic and I should try it.  I did.  Shortly after, a group of much younger high school kids who were drunk off their butts showed up.  Among them was a girl M was dating at the time.  They were yelling and screaming and having a good ol’ time, but the noise was too much for some of the neighbors.  Poor M was trying his best to get them to leave before too much attention was called to us, but it was too late.  Right after the group left the cops showed up.  Several of them from what I remember.

The guys were frantic hiding their beers.  One of them actually ran upstairs and “hid” in Mr. and Mrs. C’s bedroom with Mrs. C.  Another ran into the woods.  (They had been arrested before for underage drinking and couldn’t be caught again or else they would face some serious sentencing.)  Anyway – the rest of us were there in the garage hoping the situation would just smooth over with no more drama.  Me – I was still standing there openly holding my O’Doul’s like nothing was happening.  Why hide an O’Doul’s?!  I was non-alcoholic, right?  The cops didn’t buy that we were just hanging out playing pool and had the boys open the coolers.  Of course, they were full of beer.  So after making them pour it all out, they proceeded to arrest everyone for consumption under the age of 21.  And there I was, STILL holding the O’Doul’s.  One policeman finally came up to me and asked me what I was drinking.  When I showed him, he informed me that it was still an alcoholic beverage and I was going to jail.  It was at this point I started to freak out a little but calmly asked why.  He said that it still had alcohol in it and legally could not be bought or consumed by someone under the age of 21.  Now, let’s be clear here.  O’Doul’s has .4% alcohol by volume in it.  Robitussin and most any mouthwash you can buy have more alcohol in them than this beer but to jail I was going.  Mr. C intervened at this point to argue my case.  He said to the officer, “Take these boys, they’re obviously guilty, but her?  Really?”  This did nothing to persuade the cops from dragging me away with the rest of the guys, so he promised to bail me out.  It was the least he could do, he said.

Six of us were put into two separate police cars.  The ride to the station was eventful as our officer was speeding 10 mph over the speed limit with no lights and then we got the added joy of accompanying him on a traffic stop.  Apparently, pulling over a woman with a busted taillight was top priority for him.  When we finally got to the station we were booked and put in two different holding cells.  One for the males and one for the female.  Notice I say female in the singular as I was the only girl.  The cells were directly across from each other and there was a small window in each door.  We took turns flashing middle-class, white kid gang signs at each other to pass the time.  You know – giving the finger, sticking out tongues out in lewd ways, etc.  We were hard core criminals.

Finally, we started getting bailed out one by one.  Or rather, the guys started getting bailed out.  I still sat alone in my little cell.  I had no idea of the commotion outside that was happening on my behalf.  Apparently, Mr. C was not allowed to bail me out because he was not a relative.  So my boyfriend’s dad, Mr. L, had tried to tell the officers that he was my father-in-law.  I was finally escorted to the bailout counter (or whatever you call it) and asked if he was in fact my father-in-law.  Now during this time Mr. L was making hand motions to me trying to get me to play along, but my little, innocent self simply replied, “Not yet.”  Mr. L’s shoulders slumped and I knew I had messed up.  Back to the holding cell I went after a knowing “mmm-hmm” from the bailiff.  This was not the end though.  Mr. L and Mr. C were determined that I not spending the night in jail.  Mr. L and his infinite wisdom called the scariest person we all knew – Mrs. L.  Mrs. L was (and still is) one of the sweetest people you’d ever meet but cross her and some sort of she-devil would emerge.  Now you must know that for all intents and purposes Mr. and Mrs. L did consider me their daughter (still do even after all these years).  Once hearing that I would not be allowed to leave with either Mr. C or Mr. L, Mrs. L proceeded to call the Chief of Police – at home – waking him up.  From what I understand she laid into him about his officers holding in his jail a sweet little girl who had been wrongfully arrested for drinking a non-alcoholic beer and his officers would not let her husband bail her out.  I was free about 10 minutes later.  Yes – small towns are different like that.

Even after all this I still made it back to my mother’s house a full thirty minutes before I said I would be home.  (I was staying with mom as I was in the middle of trying to find a place and move back to town from college.)  When she asked why I was home so early, I had to inform her of the evening’s events prefacing the story by saying, “Before you read it in the paper tomorrow or get a phone call from one of your friends who did…”  She honestly didn’t know whether to laugh or be upset.  We did make the paper the next day and she did get a couple of phone calls.  Small town living – nothing like it.  My charges were dropped in court a couple of months later.  The district attorney thought the whole thing was ridiculous.  Some of my friends didn’t get off so easy.  They probably would have done better to stick with O’Doul’s themselves.