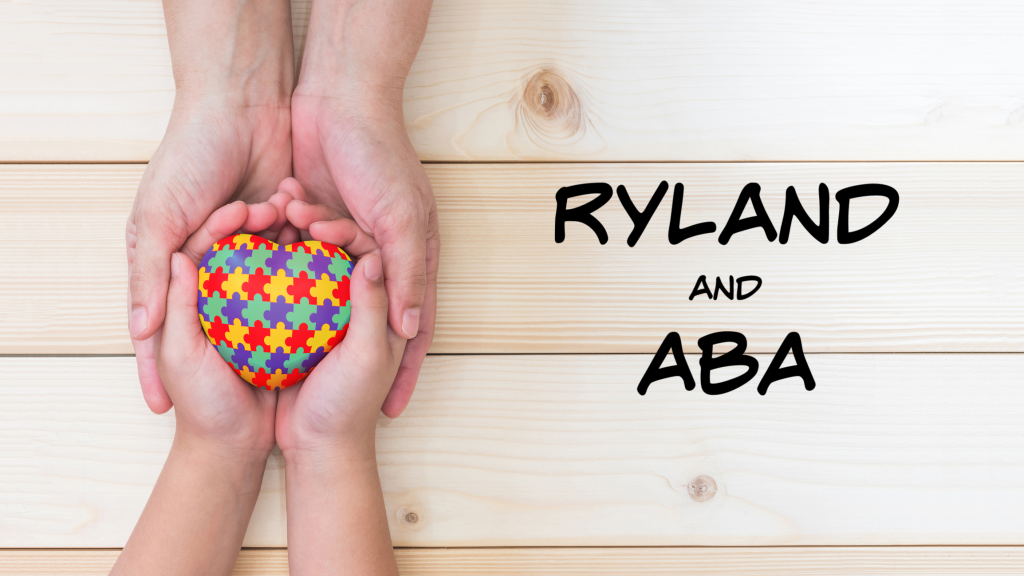 One of Ryland’s therapies is ABA.  ABA stands for Applied Behavior Analysis.  A search on the internet will bring up several articles questioning the ethics of ABA therapy arguing that its core principles are cruel.  We have not had that experience.  Not to say that unkindness doesn’t happen, there is certainly room for it, but honestly, that can happen with any type of therapy.

ABA therapy has been used since the 1950s and used to treat autism since the 1960s.  Only recently has ABA become the “gold standard” for autism treatment.  In the beginning, harsh punishment was used to modify behavior deemed abnormal.  Horrifically enough, in some cases, this would even include shock treatments.  To be fair though, the field of psychology at the time used what we now consider to be barbaric practices in general and very little was known about autism.  So, I can see why so many adults with autism are now speaking out about the evils of ABA.  However, these days things are much different.

Today, positive reinforcement is the cornerstone of the therapy.  Good behavior or tasks that have been completed in a satisfactory manner are praised while negative behaviors or outcomes are redirected.  A reinforcer is used to coax the patient complete tasks.

The patient is given goals to work toward and these goals are broken down into smaller, stepping stone type goals.  For example, one of Ry’s goals is for him to dress himself.  We aren’t jumping right in and expecting him to put his clothes on with little guidance.  Instead, for right now, we are concentrating on him pulling his pants up appropriately – meaning all the way up – and zipping them.   He is also working on pulling his shirt down in back as soon as he gets it on.  You see, baby steps.  To accomplish these goals we prompt him, sometimes repeatedly, to perform the said task then praise him with high fives when he finally does it.  It is a painstakingly slow process but it’s working!

Waiting is another of his goals.  A year ago, Ryland would constantly be moving.  Having a conversation after a therapy or with his teacher after school was completely unheard of unless I did it with him pulling my arm out of socket.  After months of saying wait, counting to 10, then following it up with a “Thank you for waiting! Good job!” he will now stand for up to 15 seconds waiting patiently which is something close to miraculous.  This has also translated over into other everyday areas.  He used to be so impatient when he “asked” for more milk, crackers, etc.  Now we can say, “Wait” and he will give you up to a minute to give him what he wants or go distract himself until his want is fulfilled.  Unfortunately, he doesn’t seem to understand the meaning of the word “No” most of the time.  We’re still working on that one.

Another thing we’re working on with Ry is his use of PECS for communicating.  PECS stands for Picture Exchange Communication System.  Because Ry is non-verbal, we are encouraging him to use pictures to communicate his wants and needs.  Most of this work is done in speech therapy, but we are reinforcing it at home and during ABA.  During his in-home ABA sessions, Ry’s RBT (Registered Behavior Technician) will take his reinforcer item – usually his Kindle – and ask him what he wants.  He won’t get it back until he presents her with the picture card of his Kindle.  (I can’t tell you how excited we, his RBT and I, got the first time he went and grabbed the picture without being prompted!)  This is the same procedure we use when he wants the basics – milk, crackers, sandwich, etc.  We only have so many pictures right now adding more as he becomes more proficient.

Ry only has 10 hours of ABA therapy each week.  Some patients have up to 40 hours a week.  He has in-home sessions two days a week and one session in clinic.  During his in-clinic sessions, he works on social skills with other children while at home we concentrate on self-care.  At the in-home sessions, the family is also being trained in how to implement the strategies used to modify his behavior when his RBT isn’t there.  Most of his session time is spent with his RBT but she has a supervisor called a BCBA (Board Certified Behavior Analyst) who sets the goals and oversees his therapy.  She comes to at least one in-home session a month.

Another complaint that adults with autism have against ABA is that they feel it forced them to be something and act in a way that was contradictory of who they are.  They tell stories of being forced to stop stimming (self-stimulatory behavior such as arm flapping, rocking or spinning) or look people in the eye in order to make them “normal.”  I can see why they would call that abuse.  To stop an autistic person from stimming or make them look you in the eye is to deny them the tools they have for processing their environment.   Again, this has not been our experience.  Ry is learning skills to broaden his world without losing who he is.

Overall, our experience with ABA has been extremely positive.  Ry is showing slow improvement, but improvement none the less.  We can finally see a life possible for him that we couldn’t see before.  I look forward to what the future holds for him now.