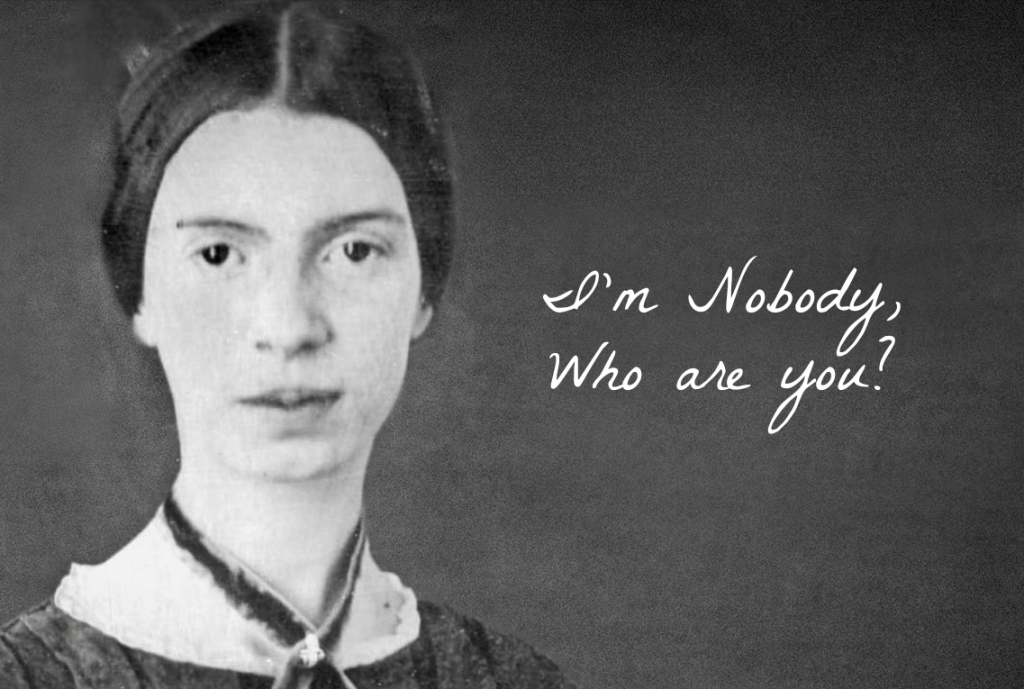 How dreary – to be – Somebody!
How public – like a Frog –
To tell one’s name – the livelong June –
To an admiring Bog!

This is one of Emily Dickinson’s most well-known poems.  I think that’s because it is relatable to so many of us.  At some point in our lives we all feel like Nobody.  There are a lot of us out here.  But, as implied in the poem, being a nobody is not necessarily a bad thing.  There can be a type of comfort in not standing out.  A kind of solidarity with all the others who are just like you.

But what if you don’t want to be Nobody?  What if you want to stand out and be Somebody?  There’s no shame in that either.  I’d argue that there is something in all of us that wants to be unique.  In fact, I believe that there is a tinge of jealousy in Dickinson’s words in the second stanza.  Kind of a “well if I can’t be Somebody then Somebodies are egotistical” type of thing.  The question boils down to just how open you are to being an original?  Standing in a spotlight can bring a whole lot of attention, but it can also bring unwanted attention too.  It’s almost like putting a target on your back asking for haters to come hatin’ – to put it in modern terms.  Kind of like Dickinson when she takes the jab at Somebodies in the poem.

Still though, I think I prefer to be Somebody.  Not that I want to be considered conceited or self-important – I just want to be different.  I have no idea how I want to be different – how I want to stand out – but I know that I don’t want to be Nobody.  Mainly because being Nobody, for me, has a very lonely quality to it.  Yes, there are lots of us out here and as I said earlier there is a type of comfort in that, but the word “nobody” infers a kind of isolation.  Each of us being our own little islands of nothingness.  That’s where depression comes in.  Depression tells you that you are nothing – nobody.  And when you are in the throws of it, knowing that you aren’t alone – as important as that is – can be little comfort.  That, my dear friends, is why I don’t want to be Nobody.  My depression has caused me to fear the concept.  Let me be Somebody – anybody!

It makes me wonder about Dickinson’s mental health in a way.  It has been speculated that she suffered from depression or bipolar disorder.  Many of her other poems deal with death and the morbid.  She shut herself off from the world becoming a recluse only communicating to the outside world through letters to friends.  Perhaps she is trying to express her own depression by being a Nobody.  Trying to find a bit of comfort that she wasn’t alone in her despair. I’ll be willing to bet she wanted to be Somebody, but didn’t know how to do that given who, when and where she was.  Not unlike several of us today.

One thought on “I’m Nobody, Who Are You?”