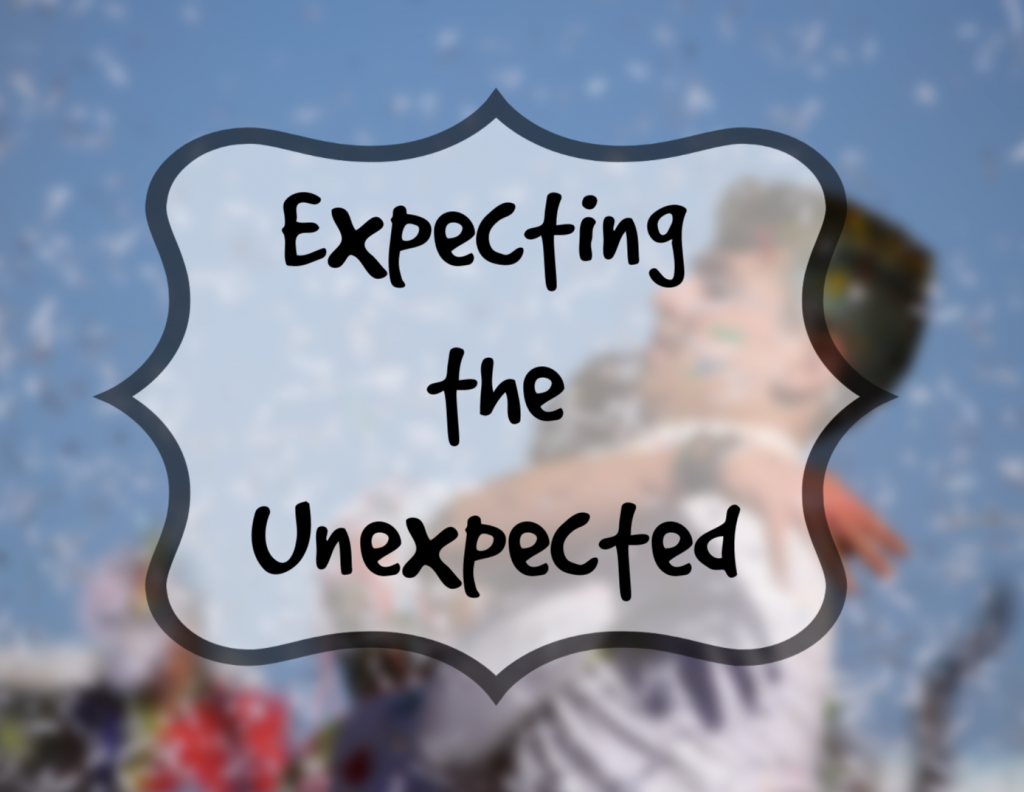 We all have expectations for our lives.  A lifestyle that we want to attain.  I had expected to live a normal, boring kind of life with a husband that was home every night, well-behaved kids and cats that didn’t leave litter boxes so stinky.  Yet sometimes reality comes crashing in and ruins what would otherwise be a fine day.  I’ve learned through life with Ry not to have normal expectations.  I’ve learned instead to expect the unexpected.  Here’s some examples for your reading pleasure.

It’s a beautiful Saturday morning and I’m all ready to start some light house cleaning with the help of the kids thinking we’ll be done by lunch and then can enjoy the rest of the day lounging in front of the tv or curled up with a book.  HA!  What really happens is Ry decides this will be the morning that he needs to pull his bed apart and then insists that his family jewels need to be displayed for all to see while running around the house yelling.  After several failed attempts at keeping a pull-up on him, he pees on the carpet, laughs and rips the sheets off his bed that I just made and creates a cocoon for himself with his comforter.  At least there’s no poop nuggets to contend with.  Oops – there they are!

I pick Ry up from school then stop by the grocery store very quickly to pick up a few last-minute things for dinner before heading home.  All goes well for the first two minutes then Ry starts looking up at the lights while we’re walking and starts stimming.  He then takes off running for the door.  Before I even have the chance to think I take off after him catching up to him as he reaches the end of the aisle leaving the buggy behind with my purse.  I try to walk him back to the buggy – make that pull him back to the buggy, but he isn’t budging.  In fact, it looks more like he’s running in place only I have his arm.  After a couple of minutes of this tug of war a kind lady asks if she can retrieve my purse for me.  I gratefully accept and Ry and I head for the door.  I stop him just long enough to quickly explain to a cashier what has happened and that I’m sorry that I’m leaving a buggy in the middle of the aisle.  She tells me while we are heading out the door that she will try to put it in the cooler for me to come back for later.  (I love our neighborhood Food Lion!)  We make it to the car and a woman yells that Ry has lost a shoe.  She comes running up to me with it just as I start getting Ry in the car.  This is why I don’t take him to the store with me anymore.

One regular day after leaving speech therapy with Ry I stop for gas at a large, busy gas station near the house.  Halfway through filling the tank, Ry decides that he no longer wants to be in the car and crawls out of the back seat and through the driver door.  I grab him to keep him from running out into the parking lot where cars were coming and going.  He fights me hard as I try to guide him back to his car door.  I know people are thinking that I’m trying to kidnap him the way he is fighting.  Finally, a woman stops her car and asks if I need help.  She says that she has worked with special needs children and understands.  I almost break out in tears.  With her on one side and me on the other we’re able to get Ry back to the car.  The gentleman who was pumping his gas behind me is kind enough to help us open the door and get Ry back in his seat.  All I wanted to do was fill up the gas tank.  Fun times.

Another day I am taking Ryland to a doctor’s appointment.  While driving, the doctor’s office called to reschedule the appointment (grrr) so I pull over to the side of the road into a small parking lot to take the call safely.  Ry gets bored and crawls into the front seat and messes with the radio then out of nowhere opens the door and gets out!!  Once again, I am fighting with him to keep him from heading out into traffic.  Again, I’m waiting for someone to stop, thinking that I’m trying to kidnap him.  This time though he pulls me to the back of the car to where his transport chair is.  (We put him in a transport chair – wheelchair – when we go to places where we need him to be still and settled.  It’s the only thing that works.)  I open the trunk and he starts to pull the chair out himself so I open it and he sits down expecting to be taken somewhere.  I walk him a block away to a convenience store, buy a drink and then walk back to the car where he immediately gets out of the chair and crawls back into his seat in the car.  Life with Ry is never boring.

There are hundreds of these type stories.  In most of them I’m praying that no one calls the police thinking I’m trying to kidnap some random kid.  Life with Ry is unexpected and wonderful even though it can get scary and frustrating.  I learned a long time ago not to have too many expectations for an easy, boring kind of life – something always pops up to take you by surprise.