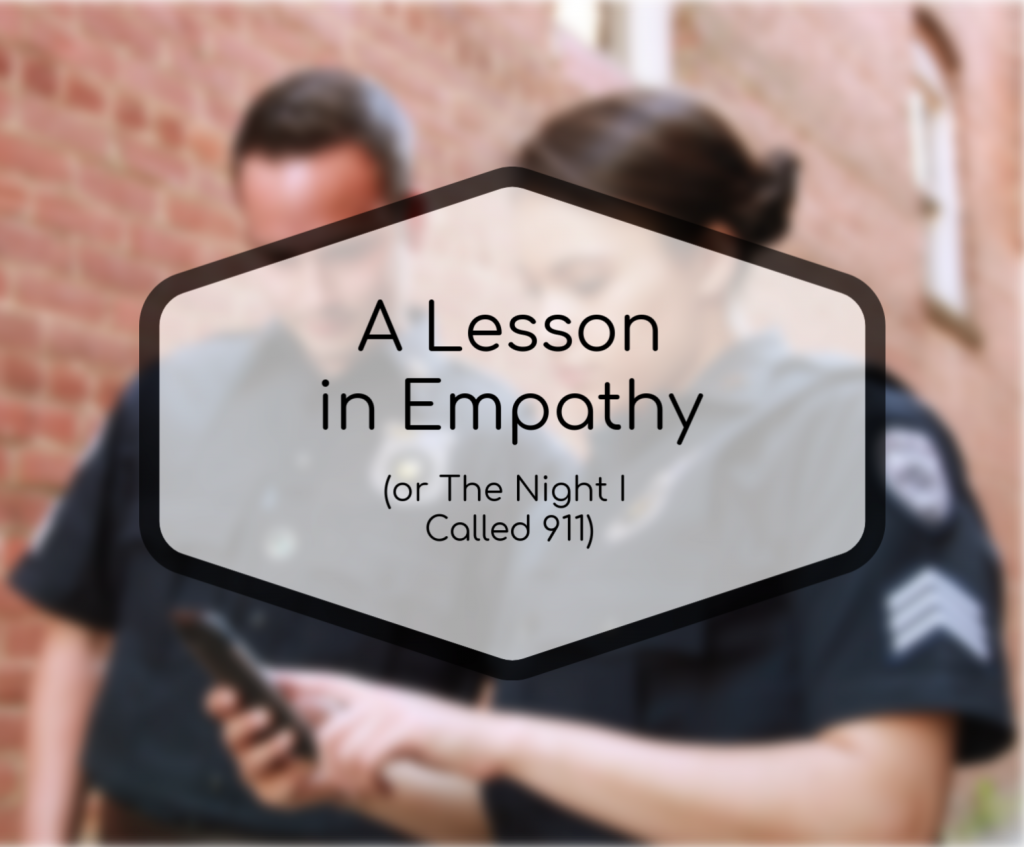 People with mental health issues are all around you and you may never really know it.  It’s hard to know what others are going through if you don’t know them that well – or at all.  How many times have you been running errands and had a run in with someone having a bad day?  Did you call them a jerk, or did you try to understand where they might be coming from?  We all have not-so-great moments where people may judge us while not knowing the full story.  I’d like to share a story that demonstrates one time it went both ways.

Years ago, when Paix was only 2 years old, I had to call the police on an ex-boyfriend.  This was during the time before Eric and I had started dating.  I was living on my own with Paix in a two-bedroom apartment that was in a building that had one time be the Sunday school rooms of a church.  We lived on the third floor – the top floor.  I didn’t date a whole lot back then, but I did date.  I had broken up with this particular boyfriend because he had started drinking heavily and I didn’t want Paix around that type of behavior.  He hadn’t gotten violent, but he was showing signs that it could happen and soon.

One night after Paix and I had gone to bed, he started banging on my door yelling at me to let him in – that he just wanted to talk.  I could tell that he was drunk and told him to leave.  He didn’t.  In fact, he started banging louder and messing with the door knob.  Then there came a kind of scratching noise around the door knob.  I feared that he was trying to pick the lock, so I called 911.  I was scared.  I had never had anything like this happen before and didn’t know exactly how to act.  I prayed the police would get there before he could get in.

Not long after I made the phone call, there was a commotion in the hallway and then a knock on the door.  Seconds later there were four policemen in my apartment.  I only really remember two of them clearly – a very large, teddy bear type and a small guy with a really bad attitude – you could tell he was angry.  They started asking me questions about what had happened and by that time I was so relieved that I started crying.  They told me that my ex wasn’t trying to pick the lock but instead had a ring that he was rubbing against the door.  It was a metal door so that’s why it sounded like scratching.

When I heard that, I immediately became embarrassed.  I had called the police thinking it was something far more serious than it was.  I started crying harder.  I told them that I didn’t want him to get in trouble – that I just wanted him to go away.  That’s when the little cop started drilling into me.  He told me that my ex was going to jail whether I wanted him to or not because they could hear him all the way down in the parking lot.  He began accusing me of not really wanting them there to help at all.  He said that it was one of those situations where I would have him (the ex) back over the next night like nothing had happened.  I cried even harder saying no, that wasn’t true.  That I just didn’t want him to get in trouble if he wasn’t trying to break in.  I was so confused and disoriented.  Like I said, I had never been in this type of situation before.  It was the first time I had ever called 911.  I was a young, single mother who was just trying to make a life for myself.

The big cop put his hand on the little cop’s shoulder and said, “Take it easy on her.  She’s obviously scared and upset.”  I could have hugged him.  The little cop stood down after that but kept giving me the stink eye.

It was then that I noticed that he was recovering from a beating.  There were old bruises and scabs on his face and a bandage on one arm.  It hit me that he looked like the policeman that had been in the news a couple of weeks earlier.  A police officer had been jumped and severely beaten responding to a domestic violence call and had even been hospitalized for short time.  This was who showed up at my apartment.  I couldn’t really process that information then but when I looked back, I could see why he reacted to me the way he did.  PTSD is not reserved for military service members.  This policeman had responded to what must have been given to them as a domestic violence call and he was triggered.  It made sense to me.  If I had realized all that earlier, I would have been more understanding of him berating of me.  I wouldn’t have taken it so personally.

I had met him at a moment when I was not in my normal element and he had met me while he was still healing from his own set of wounds.  See what I mean about judging people without knowing the full story?  If he knew who I was really instead of making his judgement of me being one of “those” women, and I had known right away that he had recently been beaten while out on a call similar to mine, that whole interaction may have gone a lot differently.  My point is – be kind.  You never know what someone else is going through.