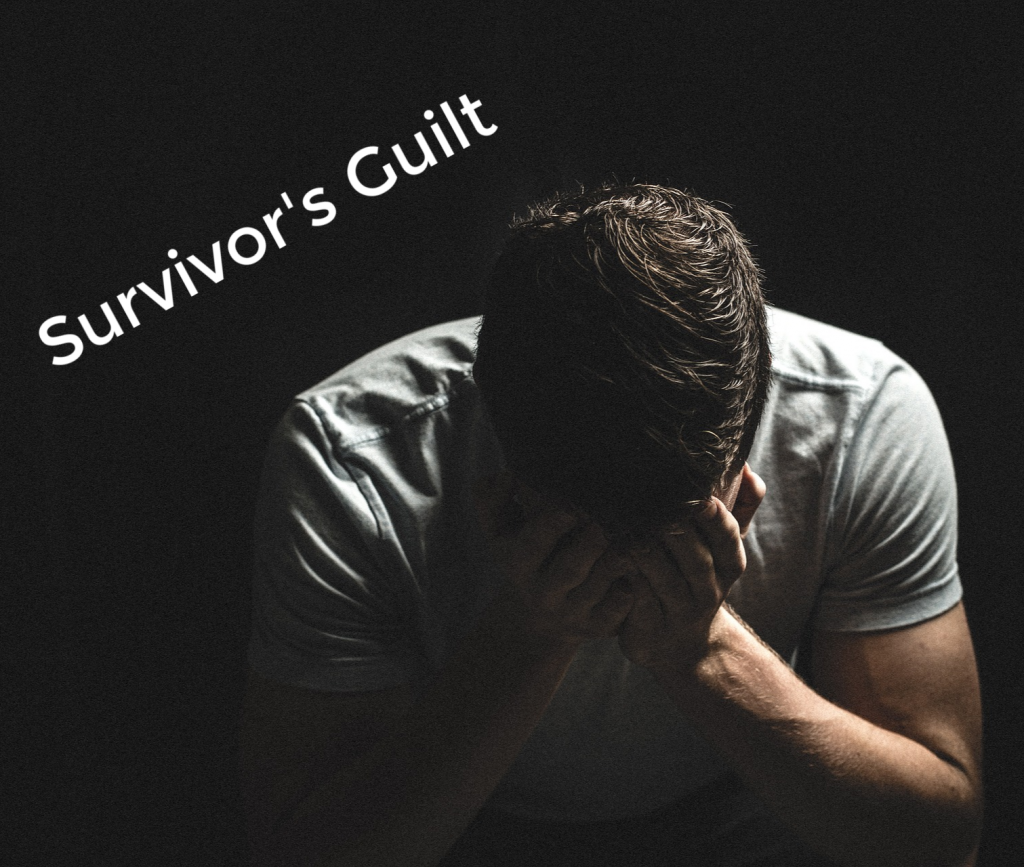 Guilt and PTSD go hand in hand.  Many with PTSD harbor some sort of guilt. Survivor’s guilt is one of the major kinds to be associated.  Survivor’s guilt at one time was classified as its own condition in the DSM (Diagnostic and Statistical Manual of Mental Disorders) but has since been redefined as a significant symptom of PTSD even though one does not have to be diagnosed with PTSD in order to have survivor’s guilt.  A more general form of guilt may also be a contributing factor to the intrusive thoughts in those with PTSD, but for the purposes of this article we will focus on survivor’s guilt.

Many who have lived through combat or natural disasters or even terrorist attacks deal with survivor’s guilt.  “Why didn’t I do more to help others survive?” “Why did I live and others didn’t?”  With Eric’s PTSD, these feelings would hit especially hard around holidays, anniversaries of certain incidents or after receiving news of another friend lost to suicide.  He would ruminate over his good fortune at being able to enjoy family and friends with his health and all his limbs while others he knew couldn’t.  This was usually also followed by a deep depression.

Sometimes this guilt is rational – there is a direct correlation between actions that could or could not have been done to avoid disaster.  In Eric’s case one of the incidents that caused him guilt was when he traded places with a buddy in a convoy and the Humvee he would have been riding in got hit by an IED.  The guy he had changed places with was injured – not terribly bad, but enough to send him home.  Eric kept going over and over in his head how it was his fault for his friend getting hurt because it was supposed to be him.

More often than not though, survivor’s guilt is based on irrational thought patterns.  Perhaps the person was miles away from the tragic event or given the immediate situation there was nothing else that could have been done differently.  The majority of Eric’s guilt came from the time he was in Warrant Officer Candidate School (WOC).  His former infantry unit had been deployed again to Iraq and as the word of casualties (injuries and deaths) made its way to us, his guilt about not being with them grew.  As if his presence with them would make these events less likely or not happen at all.

The irrational thoughts are a little easier to deal with especially in therapy.  Direct questions can be asked and explored to counter the thought process.  Rational guilt is a little more complicated.  The key to overcoming survivor’s guilt is to be able to talk about it, feel the emotions and then process them.

If you know someone who is experiencing survivor’s guilt, here a few things you can do to help:

Survivor’s guilt can be difficult to process but it can be worked through with patience and therapy.  One does not need to live with unfounded guilt that can rip them apart emotionally.  Eric eventually worked his way through his guilt although I think at times it still likes to pop up in his head.  Survivor’s guilt can be serious and as mentioned earlier may lead to suicidal ideations or thoughts.  If you know someone who may be suffering from survivor’s guilt, please ask them to seek treatment.  There is no shame in getting help.