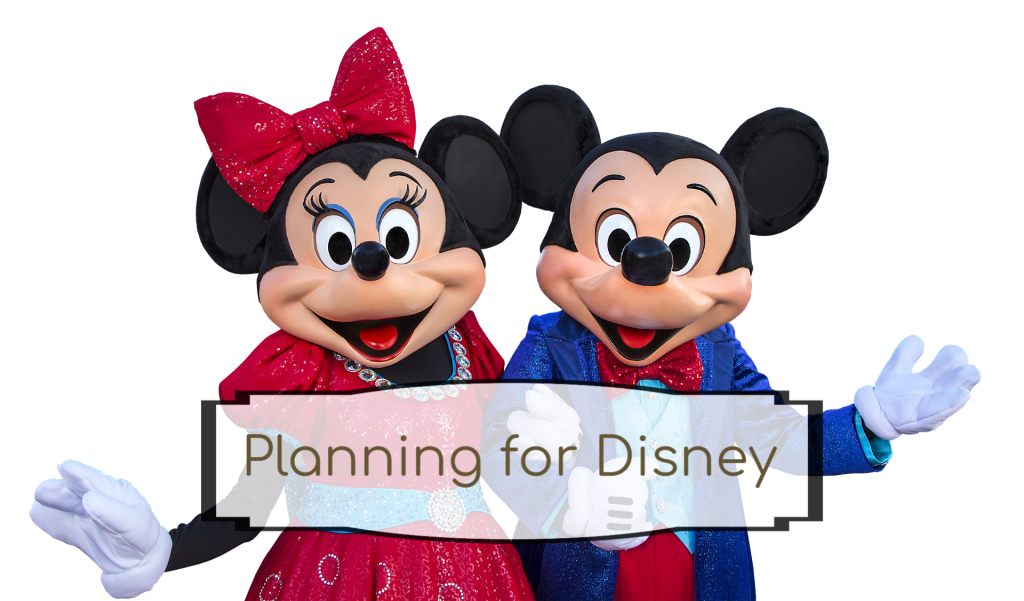 Our family will be going to Disney next month to help my mother celebrate her 70th birthday.  It is going to be a big family vacation.  We are excited because we haven’t had the opportunity to go to Disney with the kids yet – so it’s a big deal.  What I’m not excited about is all the planning I’m having to do in order to make sure Ry will be taken care of.  I don’t think people realize just how much groundwork needs to go into preparing for a trip.  Disney requires planning by anyone, but it is magnified when you are dealing with a special needs child.

One thing I’ve had to think about is that I have no idea how Ry will react in the Disney parks.  He generally doesn’t like crowds and will try to get as far away from them as possible so there is a good chance he will want to have nothing to do with being in the parks at all.  Then again, he may surprise me and have a blast.  Yet again, he may only do well for a small amount of time and then have a complete meltdown.  There is just no way of telling until we get there so I need to be prepared for all scenarios.

This has made buying the tickets for the parks a challenge.  Disney tickets are expensive.  Not knowing how he will react impacts my thinking in purchasing the tickets.  If I buy a multiday pass, what if he can’t tolerate even one day?  I’ve wasted a lot of money on tickets we can’t use.  But then if I buy a one-day ticket for each of us and he does great in the parks, I will be spending much more money than if I bought the multiday pass in advance.  Is purchasing the multiday pass worth the risk?  Things to ponder.

While at the parks we will be using Ry’s transport chair (wheelchair).  It has a seatbelt on it and keeps him settled and in a place so that I don’t have to worry so much about him getting away from me and running off.  He also wears out quickly if walking.  If he’s tired, he will sit down right where he is and not budge for a long, long time.  We had this happen to us on a trip to Washington, DC.  He had to be carried for most of our touring time.  Thank goodness he was much smaller then!  There is no way I could do that now – therefore, transport chair.

Knowing that we will be using a transport chair, transportation to and from the parks needs to be taken into consideration.  We won’t be staying at a Disney resort.  Is there a shuttle bus that we can use?  Are they equipped to handle wheelchairs?  If we decide to take our own vehicle to the parks, what is the contingency plan if Ry cannot handle being in the park and we need to leave.  Will other members of the family be able to get back to the hotel?

When thinking about our adventures in the parks themselves, I need to take into consideration how he may react to different rides.  Thankfully, Disney provides a PDF on their website that breaks down what may trigger guests with Autism and/or cognitive disabilities.  They have a list of every ride in every park specifying what the guest may experience – such as bright, flashing lights, periods of darkness, bumps, speed, smells, etc.  Kudos to Disney for being so thorough!  They even list what kind of restraint, if any, is used for each ride.  With this information I can gauge which rides would be most suitable for Ry instead of guessing when we get there.

Speaking of rides and restraints – I am concerned about rides without restraints even if they are the slow, passive rides.  For example, I know that the It’s a Small World ride is simply a meandering ride that gives you a quick world tour of sorts all while playing the song It’s a Small World on repeat.  Now if there are no restraints for this ride, Ry could try to stand up during the ride and get off while it is in motion.  Especially if he hates the song.  He’s very particular about his music and if he doesn’t like the song, he will try to change it or get away from it.  This happens a lot with the radio in the car or with his kindle at home.  So, what most people would view as a simple ride through a very basic attraction could very well turn into a nightmare for me and Ryland.  Side note:  I do plan on introducing the song It’s a Small World to Ry before we get there to see if will tolerate it.  If he doesn’t, we won’t even attempt that ride.

Then there are the lines for rides to consider.  Disney offers a few different options for children with Autism and/or cognitive delays.  Fast Pass is available to everyone and is definitely an option, but they also have a Disability Access Service that will allow patrons to schedule a time to come back comparable to the time of the wait in line.  This must be coordinated through Guest Relations when you enter the parks.  Apparently, Disney tries very hard to accommodate those with disabilities.

Everything I’ve mentioned so far deals strictly with the Disney parks, what I haven’t talked about yet is the rest of the stay away from home.  Ry doesn’t sleep.  This can cause a bit of exhaustion when staying in a hotel room.  Usually because everything is so new and different, it takes a long while for Ry to get comfortable in his surroundings.  We must unplug the phone and any clock radios that may be in the room.  He will turn the radio on full blast if it stays plugged in or at the very least press all the buttons until it breaks.  Yes – that has happened before.  We have to find creative ways to lock the door to keep him from getting out.  Many times, this includes moving furniture in front of the door although he has been known to move said furniture and still escape.  When we stay in a suite, things are a little easier as we are in a bedroom creating an extra door to prevent eloping.  Also, he is very capable of unhooking chains or opening bar locks on the door.

Our plan this trip is to bring a small tent for him to play or sleep in.  We already have said tent and Ry loves it.  He’s made us drag it all over the house in order for him to play in it in every room.  It is put away for now because we don’t want him to get bored with it before we really need it.  Here’s to hoping the hotel room will allow the space for it and that it actually works!

Drinking is another concern I have when we travel.  Ry generally drinks milk with Carnation Instant Breakfast mixed in.  Milk is not an easy drink to travel with and will not be available in the Disney parks.  He will drink tea and juices but prefers the milk by far and water – forget it.  I plan to have milk in the hotel room with the Carnation and hope that juice is available at the parks.  I really do worry about him getting dehydrated though, because he generally drinks a lot less when we travel.

Eating meals at restaurants is yet another concern.  Ry does not do well in restaurants.  He will rarely sit still long enough to eat much less wait for dinner to arrive.  Most times when we have eaten out, we bring his kindle to try to distract him and sometimes it works, but most of the time he just wants to get away from all the people.  Eating out is not something we do unless we absolutely have to.

One thing I am excited about for Ry is that there will be a water park at the hotel.  Ry loves water!  But even with that, I need to plan ahead and buy swimmer pull ups for him.  I’ve been researching what size and brand he needs – there are only limited companies that provide this item.  As much as I want them to be like Li’l Swimmers, the swim pull up for much younger children, they usually aren’t.  This means I may have to order a couple of different brands before finding the right fit for him.

There are so many things that need to be taken into consideration for a family like ours to plan a trip.  We are still looking forward to having a good time and I’m hoping that all the planning makes for an easier trip for us all.  Perhaps I’ll write another post outlining our adventure at Disney.  I’m sure it will be quite the escapade!

2 thoughts on “Planning for Disney”