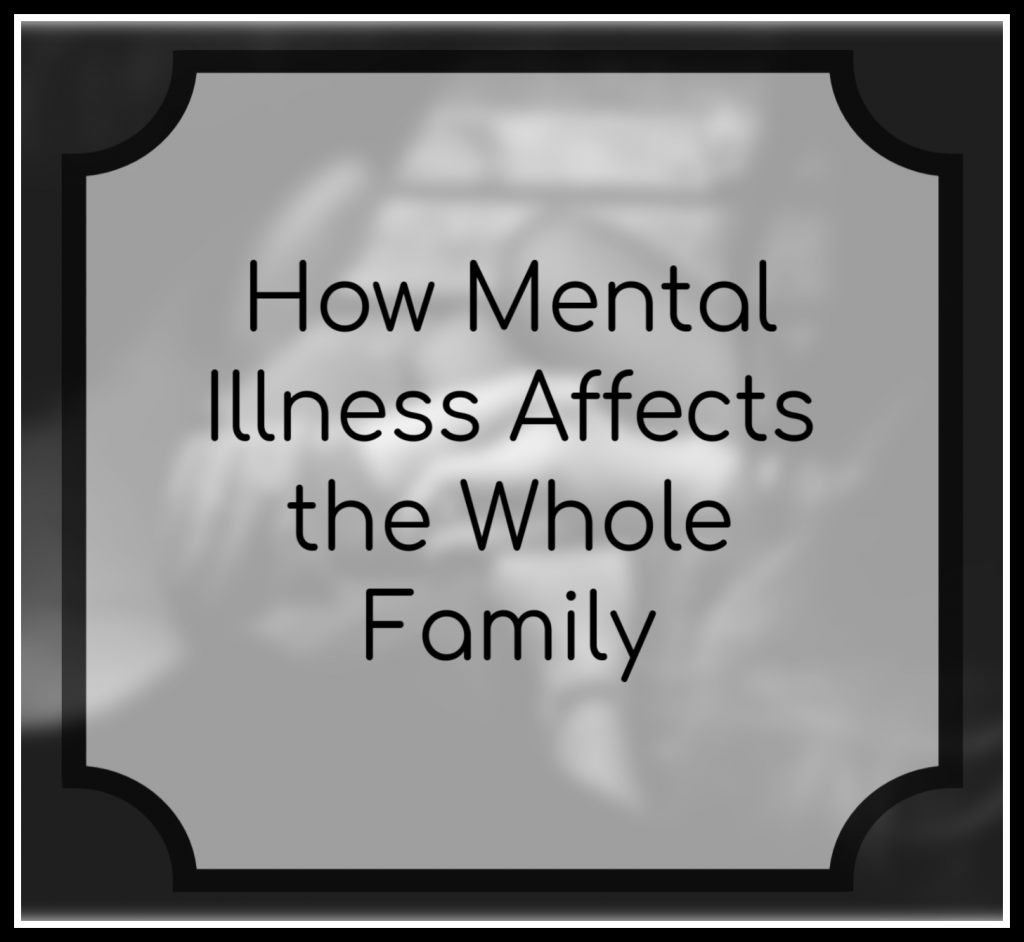 One thing that most people don’t think about when speaking about mental illness is how that disorder affects the family as a whole.  We usually talk about the person who deals with the mental illness; how they can cope, tips on self-care, what to do if such-and-such happens, etc.  Rarely, do we hear about the impact of the mental health condition on the loved ones.  Those with disorders are not an island unto themselves.  Their actions and moods can have a ripple effect on the family.

I never really thought about it like that until Eric’s PTSD.  I began noticing how his moods affected all of us.  How we walked on eggshells so as not to upset him or set off his rage.  How we always lived in silent fear of him and his temper.  Paix would instinctively know when he came home from work in a bad mood or if he shifted into one that would result in yelling.  She would usher her brothers into their bedrooms and then go hide in hers waiting for the storm to pass.  We would endure him “clearing” the house before going to bed – checking locks up to three times each.  Bear with the times we would get up at night to go to the bathroom only to be met with a gun pointed at us because he thought we might be an intruder.  Eric never saw this at the time – the effect he was having on us and we never talked about it.  It was a family secret of sorts.  It wasn’t until I started doing research on PTSD that I realized it wasn’t just us.  All the families touched by PTSD knew what we were going through.

It’s easy to picture something as dramatic as PTSD disturbing the family, but what about my depression?  Surely that couldn’t produce the same results.  It did and does.  Again – I didn’t see it – mainly because I didn’t want to see it – until my son, Aidan, started asking me if I was going to take a nap that day with a sigh in his voice.  His words would sting me.  Of course I wanted to take a nap – I always want a nap when I’m in the midst of my depression.  It would sting because it meant he knew that he would be expected to step up a little more to help out with his brother or have to do extra chores around the house to keep things in order and it broke my heart to think that because of me he was carrying a heavier burden.  He was a teenager whose only cares should have been schoolwork, a few home tasks and friends.  Not taking care of his depressed mother.  I can only imagine what it was like for all the kids when they were younger, and I was in depression mode.  How many times I would say no to an activity because I wasn’t “feeling well.”  How much time they spent alone because I was laying down.  It hurts my heart.

One doesn’t even have to be living with the family for it to affect them.  Paix was already out of the house when her first psychotic episode occurred.  Yet knowing that she was struggling with her mental health was stressful for her father and me.  We worried all the time whether she was capable of being out on her own – if she was capable of handling herself and her issues.  What could we do to help her?  As parents, I think this is only natural.

Stress in the family becomes a hallmark of those who have mental disorders.  Stress in dealing with mood swings or behaviors that occur as a result of an episode.  How should the family members react to the attitudes or anger that our loved one exhibits?  It puts a strain on the entire family dynamic.  Spouses and parents worry about their husband/wife/child and what they can do to help.  Children and siblings may become embarrassed of their parent/sibling or even confused as to what is going on.  All of which can lead to guilt, depression, anxiety or a feeling of isolation.

There is no doubt that mental illness affects the whole family when one has a mental disorder.  The key is to find support for ourselves and/or family members so that we can remain mentally secure and support our loved one.  There is no shame in reaching out to find help.  Find a therapist or participate in family counseling.  Regardless of how bad things may seem, we are not alone.  There are thousands and thousands of other families dealing with the same issues.  Try to find them through local support groups or online groups or forums.

Peace in the family is attainable even with mental health issues.  There will always be rough times, but that is true in any family.  Remembering to take care of ourselves first makes supporting our loved ones so much easier.

Related article:  How to Love Someone with a Mental Illness

2 thoughts on “How Mental Illness Affects the Whole Family”