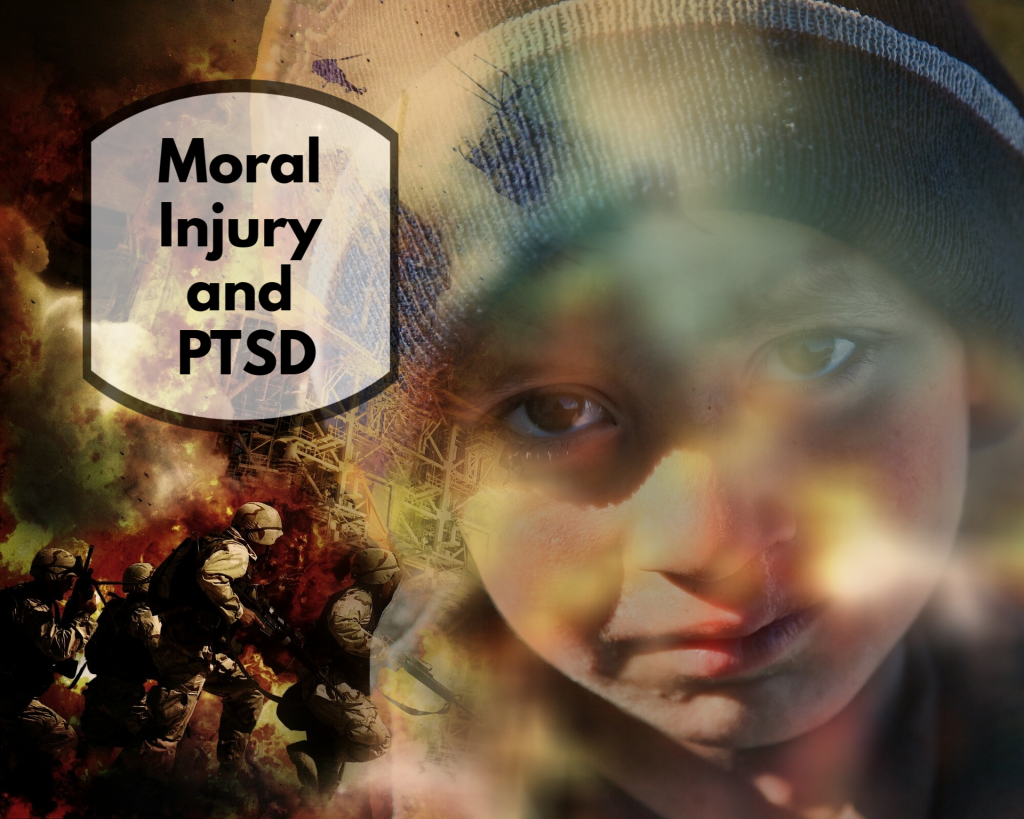 Those with PTSD and Moral Injury both exhibit anger, depression, anxiety, etc. – but there is an overwhelming sense of regret and sorrow that accompanies Moral Injury.  This is different from Survivor’s Guilt that can be a part of PTSD.  It runs much deeper.  Moral Injury is a fairly new diagnosis coming into psychiatric lingo just in the past several years due to the numbers of Iraq and Afghanistan war veterans reporting symptoms similar to PTSD but not quite falling into the same category. 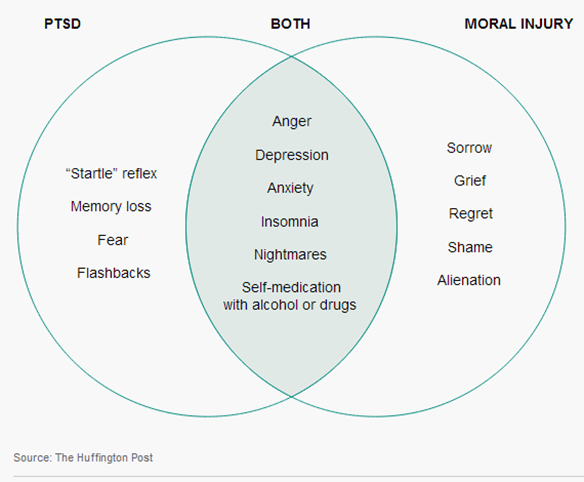 The scholarly symptoms of PTSD are broken down into three main categories:  Avoidance and Numbing, Intrusive Memories, and Anxiety and Emotions.  Avoidance and numbing include avoiding discussions of events, emotional numbness, and aversion to activities done before the trauma.  Intrusive memories include flashbacks and nightmares.  Anxiety and Emotions is comprised of the anger issues, guilt, destructive behavior, hypervigilance, and suicidal thoughts.  Eric exhibited 95% of these plus those that later research pointed to Moral Injury.

In Eric’s case, I can guess what triggered his Moral Injury and may have contributed to his trip down the PTSD road.  About 3 months in to his first deployment to Iraq his First Sergeant made him call me after an incident that really shook him up.  They were manning a check point at night on a dark road.  A vehicle with no lights approached the gate at a high rate of speed.  It did not slow down when they fired warning shots so thinking it was a bomber, they opened fire.  As it turned out, it was just a farmer whose lights didn’t work and the brakes had gone out.  They had killed an innocent man in front of his son who was also in the vehicle.  Eric told me about it in detail.  He also told me that he vomited after learning what happened.  That’s when the guilt started – that’s when his Moral Injury took root.  It was also the very last time he would tell me anything about what had happened over there until many, many years later.

The man that was shot was not the enemy, just a man at the wrong place in wrong circumstances.  This is what causes the moral dilemma.  Soldiers are trained to kill the enemy – those with guns who are shooting back at them or are meaning to kill them in some other way.  They aren’t trained to kill non-combatants – innocent bystanders.  In fact, they are trained to protect those who cannot protect themselves.  So, when an innocent is killed by a soldier’s hand, it goes against the very core belief of who they are.  This is where Moral Injury comes in.  Even though there was a potential threat based on the evidence they were presented, they had – in Eric’s mind anyway – made the wrong choice when choosing to open fire on the truck.  Even though he never spoke of it again, I know he had to of thought about it, especially when spending time with Aidan.  At the time he made a strong connection between his son and the farmer’s.

Where PTSD covers incidents where something terrible happens that is witnessed or experienced, Moral Injury cuts to the very source of what we consider to be right and wrong.  When a person is in a position where he chooses what he later interprets to be morally or spiritually wrong, that’s when Moral Injury occurs.

Moral injury can stand on its own or be present with PTSD and it isn’t only veterans who can suffer from it.  First Responders and physicians are also very much prone to Moral Injury due to the fact that they work in areas of high trauma.

Treatment for Moral Injury is still being developed as the psychiatric field learns more about it.  Right now, there are group therapies available that help the patient rebuild a sense of self through discussion and community work.  There is also something called adaptive disclosure which focuses on having the patient talk with someone they trust about the incident to help guide the patient toward self-compassion.

While PTSD and Moral Injury have many common traits, they are very different in nature.  Still help is available and the person does not have to suffer in silence.  It’s hard but it can be done.  One decision does not have to define the rest of your life.

One thought on “Moral Injury and PTSD”