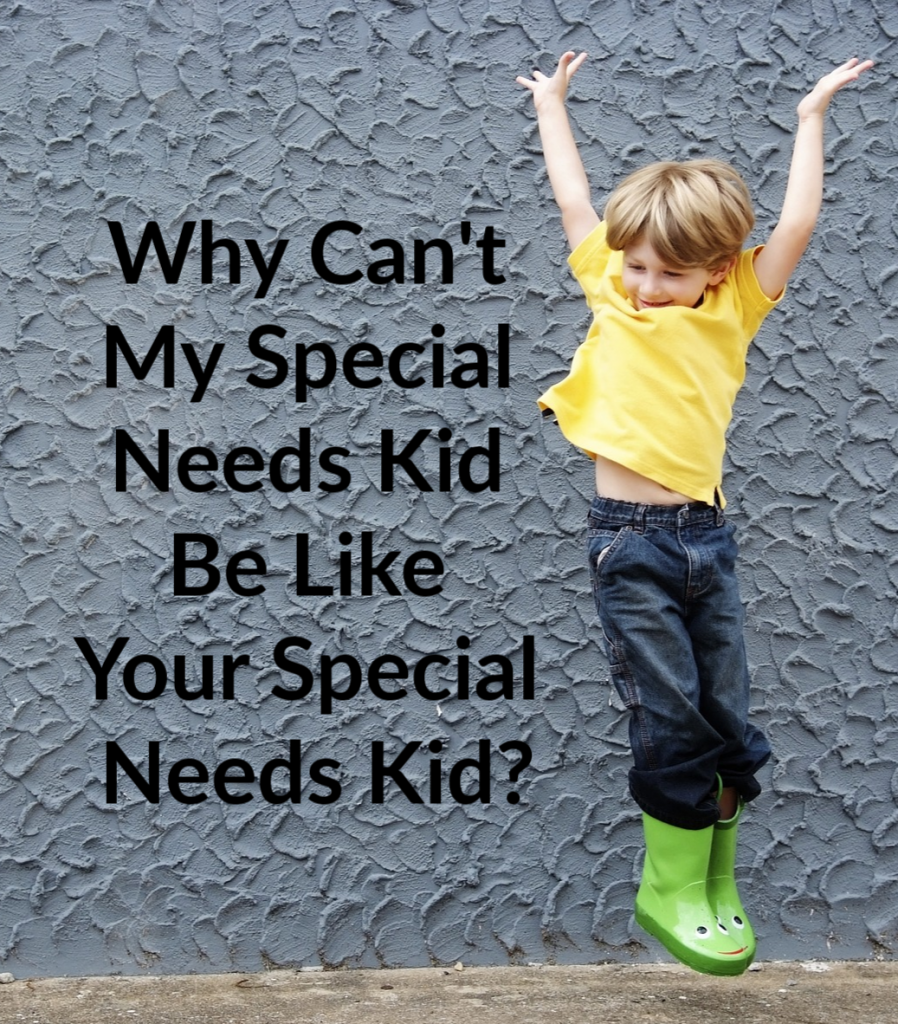 Is it awful to say that I’m jealous of some other special needs moms?  Being a parent of any special needs child is a struggle – I know that but I look around at other moms in my immediate peer group and think, “why can’t my kid be more like yours?”  Please don’t get me wrong – I love my Ry-man to the end of the universe and back, but there are just times that I wish he was… easier to deal with.

I see other autistic children sitting quietly with their parents in waiting rooms for therapy appointments while mine is running around in circles flapping and yelling.  I see other special needs kids walking beside their parents calmly while Ry has to have a death grip on me and is usually trying to walk in the opposite direction of where we need to go.  I see other parents have successfully toilet trained their children while mine is still in pull-ups at age 19.  I see other special needs kids drinking out of real cups while Ry still uses a sippy cup.  I talk to other parents whose children will sleep at night now with little to no issues while mine will still go stretches of 32 hours before taking even a nap.

I try not to compare.  We all deal with our own heartaches when it comes to our special children.  There are times though when I can’t help it.  Of course, one of the biggest truths we have to accept is that our children will never be typical.  Beyond that though, I would like for mine to have a peer group that is compatible with his own behaviors.  We haven’t found that.  What we have found are other non-verbal kids who are much more well behaved.  Then I have to ask myself, is it my fault that Ry is the way he is? For years we have tried to toilet train him.  For years we have tried to teach him to drink out of a straw.  For years we have worked on getting a tooth brush in his mouth.  And for years he has resisted all attempts.  So, is it me or is he just a stubborn mule?

What makes it all the more frustrating is that anyone who is around Ry for any amount of time knows he is “in there.”  He is smart and has a wicked sense of humor.  He surprises everyone from time to time with the things he is capable of.  Just the other week during one of his ABA sessions in home the boy was doing multiplication on his Kindle using the Starfall app.  Multiplication!  And he was getting all the answers right!  Four to five problems he did back to back and yet the boy can’t pull up his own pants without a little assistance?  Where is the logic in that?  If his RBT and BCBA weren’t there to witness it, I’m not sure anyone would believe me.

So many times I have pushed him to do what I know he is capable of doing, but he flat out refuses.  Most of the time he will do the task once correctly – just once – and I swear it is just to taunt me.  It’s almost like he is saying to me in his sly way, “Yes, mom, I can do it.  I just don’t want to.”  It can be infuriating.

This is why I get jealous of other special needs parents.  I don’t hear much about their kids doing this kind of thing.  All I usually here about is how well their child is progressing with therapy.  How it was tough at first, but progress is really being made now.  With us, it feels like Ry is a squirrel on crack.  Two steps forward, three steps back.

That’s not all together true.  He is getting better about sitting at the table even if it’s only to do puzzles or work on his PECS.  And there are times when he will wait patiently for a count of ten.  Then it’s back to balls to the wall.  He has literally tried climbing on the table to get to what he wants instead of using the proper PECS card like he had just done a few minutes earlier!

I really don’t mean to sound like I’m complaining.  Really, I don’t.  There are just times that I want to scream and punch other parents in the face for how perfect their special needs kids are acting when mine isn’t and more than likely never will based on the current attitude.  Please, someone out there tell me that it isn’t just me!

I have mourned the fact that Ry will never be “normal.”  He will always have to be taken care of in some capacity.  It is our reality.  BUT can’t I also take a few minutes from time to time to grieve just how severe he is and how unfair it is that we are where we are with him?  Being a special needs parent is never easy.  We all have our burdens to bear with love.  I think, though, that we should be able to express our frustrations as well as our pride.  None of us are perfect.