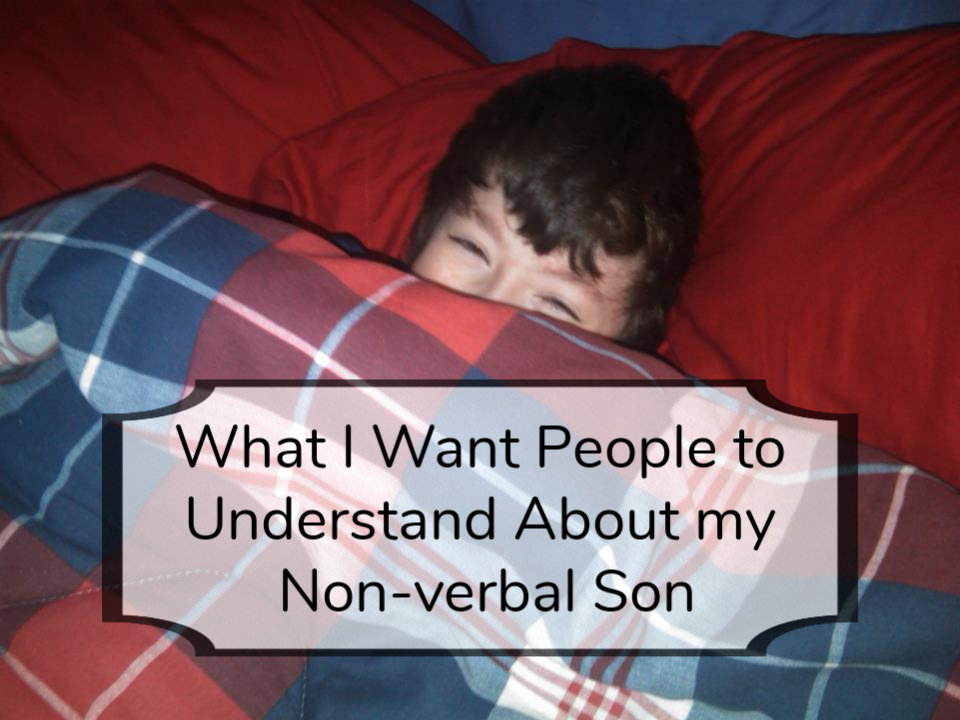 Ryland is currently 19 years old and is non-verbal.  No words whatsoever.  It’s easy to think non-verbal people are not so smart or do not have personalities that they can display.  Spend any amount of time with Ry and you will soon come to know that those things are completely untrue.

While we are trying to get Ry to learn how to use the PECS (Picture Exchange Communication System) to communicate more clearly through pictures, he can still let you know exactly what he wants and usually his basic moods completely on his own.  For instance, if he wants more to drink, he will bring you his cup or an empty one.  If he’s hungry, he’ll give you the appropriate PECS card or drag you to the cabinet or fridge to point out what he wants.

He’s also very particular about his music.  While in the car if he doesn’t like the song playing, he’ll tap your elbow to “ask” you to change the channel.  Sometimes he doesn’t like anything that’s playing and ends up grabbing your elbow with his talon-like fingers.  That part isn’t fun, and it can get kind of annoying when there is a really good jam on but he wants no part of it.  Mostly though his taste is eclectic enough to listen to most anything except the commercials.  He even has his favorite songs that he will somehow – miraculously – find on YouTube to listen to over and over.  We also sometimes indulge him by asking Alexa to play the song on repeat.  His latest favorite has been the remake of “Africa” by Weezer although he will listen to the original by Toto.  (They sound so similar.)  Another steady favorite is “All Star” by Smashmouth.

As part of his love for music he also loves to dance – with a partner for the most part.  We hold hands and sway back and forth.  To the beat even!  He’ll throw his head back and laugh and laugh.  We have danced to the radio, to kid tunes on his kindle and even to the background music to digital books – also on his kindle.  On occasion he will touch my lips for me to sing along with the tune.  He does not like it, however, when you sing and dance without his approval.  Once I was cleaning his room and he was playing his latest favorite popular pop tune.  I was singing and started dancing a little bit while I was sweeping.  He immediately grabbed my arm, ushered me out the door and closed it behind me.  Apparently, he didn’t appreciate my moves or my voice.

As you can see, Ry definitely has a personality.  He has a wicked sense of humor too.  He likes to con you into doing things and then get himself into something else.  For example, there was one time that my friend was over with her daughter.  Ry liked to sit in my friends lap and get snuggles.  (She spoiled him like that.)  Her daughter came over and sat down on her mom’s knee to join our conversation.  Ry did not approve as she was “taking his space.”  So, he got the daughter busy helping him put together a floor puzzle.  When he was satisfied that she was giving the puzzle her full attention, he came back to my friend and climbed up in her lap.  This happened twice more before the daughter caught on to what he was doing.  I knew right away but let him have his fun.  Guess that’s my evil streak showing.

At school, he would also use the distraction technique as often as he could.  Most of the time it involved making a mess for the teacher and teacher assistant to clean up while he went to retrieve a certain toy or object from a hidden location.  He pays attention to where things, such as toys, are placed when they are taken away from him for some reason – usually in an attempt to get him to focus on something else – and will know exactly where to find them days even weeks later.

There are many times during ABA (Applied Behavioral Analysis) that he’ll pull his stunts with his RBT (Registered Behavior Technician) or BCBA (Board Certified Behavior Analyst).  Listening to and following instruction and then all of a sudden giving a sideways glance with a smirk then ignoring them.  He tries to pull the same distraction technique on them too, but it doesn’t work so well on them.

He lets us in on his moods too.  If he’s happy there is lots of laughter and smiles.  If he’s upset or angry, that usually includes a lot of yelling “oooooooooooo” followed by arm flapping while rubbing his fingers together.  If he doesn’t feel well, he sleeps – a lot.  He generally doesn’t sleep more than a few hours at a time, so when he gets sick his sleep kicks into high gear.

Ry does make noises.  Mainly different vowel sounds.  He has mimicked “moos” and fart noises with his speech therapist apparently.  I’ve never gotten him to do those things with me.  His inflection is a good way to let you know how he’s feeling.  Higher inflections mean a better mood, while lower tones indicate a bad mood.

Ry also knows how to show love and affection.  He gives kisses often – especially when he wants to be left alone in his room but also when saying good-bye or “let’s leave”.  He’s recently started giving real hugs, too.  High fives are a favorite show of camaraderie and communicating a knowledge of achievement.

As you can see, just because a person may be non-verbal it does not mean that there is no communication or that they don’t have a personality that shines through.  I could spend hours telling stories about how Ry communicates his frustrations and his joys, his wants and his needs, his silliness and his serious side.  He is a beautiful human being behind all the grunts and yelps and I love him just the way he is.