Travelling alone is not for some people.  Personally, it doesn’t bother me a bit.  I actually look forward to the time alone as well as the opportunity to meet, or at least see, new and interesting people.  I’m usually not disappointed.  My trip to Hawaii was no exception.  The 4,700+ mile journey to the islands was fairly uneventful.  The trip back was more interesting.  The stay in Hawaii itself was inspiring although a bit lonely as Eric had to work all day.  The only time we did spend together was at a luau the night I arrived and the day we went shark diving – the rest of the week we only had time for late dinners before bedtime.  He was out the door by 6am most mornings.  As I said, being alone doesn’t bother me, but it would have been nice to experience Hawaii with Eric instead of simply sharing pictures of my day’s adventures with him over dinner.

I had very few outside conversations without Eric around while on my trip.  I’ve come to realize that there are two types of people – those who have no trouble starting and holding a conversation with strangers and those who do.  I fall into the ‘those that do’ category.  Eric, on the other hand, can start a conversation with anyone, anywhere over any topic.  He just says hello and people start talking.  Maybe I have a resting bitch face I don’t know about because I say hello with a smile and I typically get a look of, “Who are you talking to?”  Oh well, at least I try.  Most of my time was spent in quiet contemplation of the world around me so there was plenty of people watching to be done alongside the nature.

People watching is one of my favorite pastimes, especially while traveling.  The Hawaii trip was a gold mine of people watching.  You could tell the locals from the tourists and the military families that were just stationed there.  It was fascinating.  One thing about Hawaii – or Oahu at least – that most people don’t mention is the number of Japanese tourists.  They were everywhere.  While at the Dole Plantation, all the signs were in English and Japanese if that gives any indication of how much of the market is based on Japanese tourism.  It never ceases to amaze me how alike we all, as humans, are regardless of what country we come from.  My first taste of this notion came when I traveled to Ukraine on a mission trip many years back.  All too often we look at our differences rather than our similarities and have this unspoken understanding that we are all different somehow when in truth we are all the same.  Cultures may be different, belief systems may be different but when it comes down to it people are people, families are families, parents are parents, and kids are most definitely kids no matter what race you happen to be.  Still, island culture is a world in and of itself.  I can’t help but wonder how many Japanese people go back to Japan basing their opinion of Americans on Hawaiian culture.  If they do, we are all laid back just waiting for the next big wave to come in.  No worries.  Kind of funny if you sit and think about it. 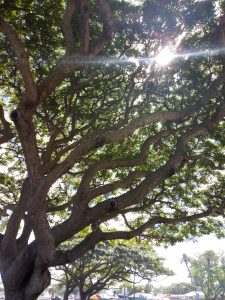 Time on the island seemed to move differently than on the mainland.  The minute you step off the plane everything kind of slows.  It may have been my own mindset, but seriously no one seemed to be in a hurry.  It wasn’t an aggravating slowness either, rather a flow of ease that was comforting.  The whole week was wrapped in this sense of “Aloha – just breathe.”  Eric and I had several conversations with waitstaff at our dinners; several interactions with staff at locations I visited, and everyone was so relaxed.  It was amazing.  I drove the entire circumference of the island a couple of times while I was there.  It only took a couple of hours, but amazingly enough it never felt like that long.  My favorite place was North Shore (Hale’iwa).  It was a 45-minute drive from the hotel, but again never felt that long.  I swear, the island has some kind of timey-wimey thing going on there.  It’s ridiculous.

Most of my time was spent in North Shore.  From the shark diving to a trip to Waimea Valley gardens and falls, to Shark’s Cove (Pupukea Beach) where I snorkeled, to the famous Giovanni’s Shrimp Truck for lunch on my final day – Hale’iwa had more to offer me than any other part of the island.  The beach views were breathtaking.  I did drive through Honolulu.  Even went to Walmart in downtown for little souvenirs for the kids.  That was interesting – hands down the strangest Wal-mart I’ve ever been in.  There was no store front – it was a parking garage.  The layout of the store was very odd as well.  I thought all Wal-marts were laid out basically the same way, but apparently not.  It was weird.  Anyway – like I was saying – most of my time was spent outside the city as far back on the “country roads” as I could get.  I love seeing the real place – not just the tourist stops.  Think I did more driving than actual walking around, but to me it was worth it.  I’d stop when I wanted to see something a little closer or take in a view a little better.  Most everywhere you looked could be a postcard picture.  I saw the mountains and the beaches.  Beautiful.  Absolutely beautiful.

As I said at the beginning, the trip back was more interesting than the trip to.  On the main flight back I sat next to a lady who was also travelling to the same small town I was – how often does that happen?  We had a small conversation about home and different places we frequented.  She had been in Hawaii staying with friends for two weeks.  Told her I was jealous as I had only had a week.  We agreed it was a wonderful place to vacation.  At the Atlanta airport waiting to catch my final flight home I met a wonderful older man that was coming back from a month-long trip in Alaska.  He had been visiting his daughter and meeting his great-granddaughter for the first time.  We chatted for nearly an hour about Alaska as Eric, Paix and I had lived there for a while when the boys were born.  I got to see pictures of his dogs and his family.  Apparently, he was one of those that has no trouble holding conversations with strangers.  I was simply blessed to be a part of it.

It was a peaceful vacation.  No responsibilities, no Ryland to look after, no appointments to make, no chaos.  Just plenty of time to do whatever or nothing.  Can’t tell you how much I needed that.  Even if life isn’t really hectic, the chaos is continual.  On my final flight home I sat next to a young new age hipster who talked to me about  the importance of taking time for yourself to recharge.  Didn’t have the heart to tell her she was preaching to the choir but did agree with her unreservedly.  I am recharged – let the chaos resume!

One thought on “Vacation ramblings…”