Yesterday Eric and I went shark cage diving.  We are in Hawaii – he is here on business, I’m here just because he is here and I can be.  We had yesterday to basically spend the day together and had decided months ago to spend it with sharks.  Truthfully, we are celebrating our 20th wedding anniversary which was a month ago.  As per usual, the Army had seen fit that we be apart for such a momentous occasion, so we have had to improvise.  I think we’ve done pretty good with this one though.  Anyway – the original plan was to go to the Galapagos Islands and swim with the Great White sharks, but that plan got scrapped pretty early on. God worked it out for us though with this Hawaii trip.  I love when stuff like that happens!  We didn’t get to swim with Great Whites, but we did get to swim with Galapagos Sharks so it kind of works out. 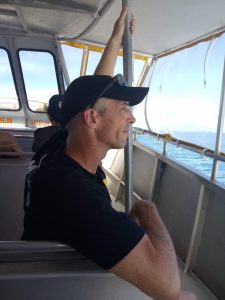 t is a beautiful, sunny morning on O’ahu.  Eric and I had stuffed ourselves with the free breakfast offered at the hotel that consisted of eggs, waffles, fruit and coffee.  Almost immediately I regretted the waffle.  It was far too heavy for me.  But we had important things to do and I wasn’t going to let anything spoil the day – certainly not a stupid waffle.  We arrived to check in for the shark dive an hour early so went to a nearby beach to hang out until the appropriate time.  Finally, it was time!  We boarded the boat and were off!  As we traveled to the site, the crew explained that it was the sound of the boat engine that drew the sharks in close because they had been conditioned years ago by the crab fishermen that they could get free meals as the traps were pulled up.  “Now we’re going to throw you in a cage by the boat.  Bwahahahaha”  Eric and I were in group number 1.  Yes!!!  After about 10-15 minutes, we reached the dive site.  By this time my stomach had settled and I was feeling just fine.  Ready to see some sharks up close and personal.  I was not disappointed! 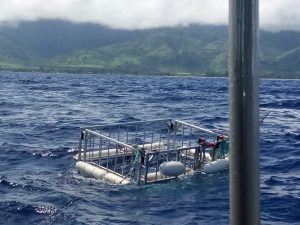 This particular experience used snorkel gear as opposed to of dive gear.  We each snorkeled up and jumped in the cage.  There were six people in our group.  The water was really choppy, so it was kind of difficult to stay steady, but the sharks were there. All around!  They came in close.  Eric had a Go Pro taking video footage and I had an underwater camera doing my best to take photos in the tumultuous water.  They were big 8-10-foot sharks.  Beautiful creatures that swam so gracefully giving us only the slightest of attention.  The water was the most beautiful shade of cobalt blue I have ever seen and the sun streaking through reflecting off the shark’s skin gave them a stunning glow.  Eric and I talked about it later and agreed it was all we could do not to reach out to try to touch them.  One guy in our group actually did get the chance!  One shark swam so close to the bottom of the cage that he was able to sneak a hand down through the bottom for a feel.  I was so jealous!!  We got twenty minutes in the cage.  Like I said before, the sea was rough.  We were being tossed around pretty good.  I had been fine the whole boat ride out to the site and most of the time down in the cage, but toward the end all the motion started getting to me and sea sickness struck.  By the time we had to exit the cage I was sick, like really sick.

Now I am no stranger to the water.  My family is from Florida and I have been on the water many, many times.  I have been sea sick once before, but only mildly.  This was a whole new level.  The crew had given us the spiel of what to do and where in case of sea sickness to which I had only halfway listened to.  Now I was on the other side of the boat breathing deeply, trying my best to remain cool and hold myself together.  I was NOT going to be the one to lose my cookies.  Especially not first!  Or so my brain thought.  My body however did not agree and proceeded to feed the fish.  Eric, who didn’t know I had gotten sick, came up and said something about bringing in more sharks by chumming and I told him that I thought I just had.  I didn’t have to feel bad for long.  A young girl in the third group came up right behind me.  She was far worse off than me.  I think being in the water did it to many of the people on board.  Most were fine until they got out of the water – then several were helping chum the waters.

All to soon we were heading back to shore.  I was grateful to be off the choppy sea, but really wished we could have been able to have another turn in the cage.  Eric and I have agreed that we will be doing another trip.  We will be getting scuba certified first and doing a cage free dive somewhere with sharks.  Probably down in the Bahamas somewhere.  It’s a thrilling feeling to know how absolutely vulnerable you are yet at the same time how truly uninterested they are in you as their meal.  We still want to dive with Great Whites too.  We’ve agreed to shoot for our thirtieth wedding anniversary for that one – Guadalupe Islands here we come!  Yes, we will be in our mid to late fifties, but whatever.  You’re never too old for adventure.

One thought on “Chumming for Sharks”