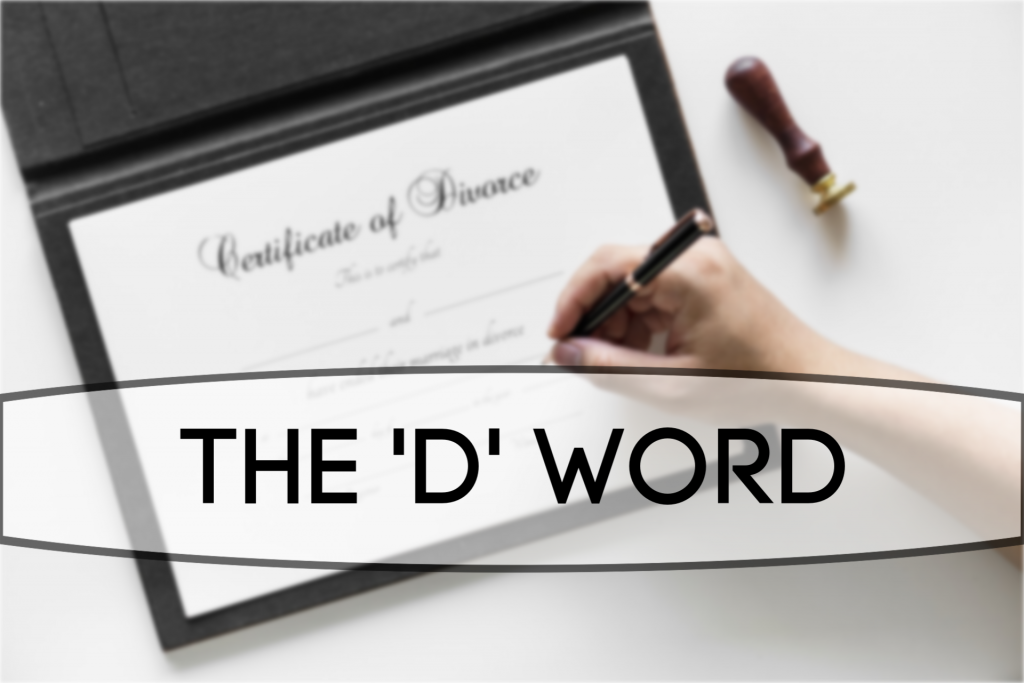 Divorce is such an ugly thing.  I wish that I could write about something else right now, but this word ‘divorce’ has consumed my entire existence these days.  Twenty years is a long time to share a life with someone.  To have that tie severed is traumatic.  Especially when one of the parties involved had no idea the marriage was in that much trouble.

My thoughts are constantly trying to have conversations with him, trying to figure out what I did wrong, what I could have done differently, how to help the kids get through this, figure out how I’m going to make it financially, what I need to have for myself and Ry in the separation agreement, how to divide assets and property fairly.  The list goes on and on.  Never stopping.  The depression alone is enough to drive your thought processes crazy – this is sheer torture.

So here I am trying to make sense of a myriad of emotion from disbelief, to anger, to devastation.  My parents divorced when I was nine years old, so I promised myself that if and when I ever got married it would be for good.  Guess that hasn’t work out the way I had planned.  Shows just how much control a person can have over their own life.

Of course, I’m agreeing to it.  So, I can’t blame all of this on him.  But I have my own reasons.  When he first told me he wanted the divorce, I held out hope that he would change his mind.  That I had time to convince him otherwise.  Then I saw things I hadn’t noticed before and realized that I was done.  Tired.  Tired of the years of being lied to, cheated on and taken for granted.  Tired of being shut out.  Tired of his anger and my fear.  Tired of trying to love someone who couldn’t really love me back.  It wasn’t always like that.  Iraq changed him.  Iraq turned him into a different man.  For years I have tried to fight his demons with him, but for the most part he hasn’t let me.  He has shut me out.  And now I’m afraid he’s just given up and that is why this is happening.  Part of me doesn’t blame him.  The other part of me is mad as hell at him for giving in.

Picking through twenty years of memories and possessions has been hellacious.  He is everywhere in the house – in every nook and cranny.  Even in this blog – I’m going to have to rewrite the intro page and the “Meet the Family” page to better suit the new circumstances.  What really hurts and angers me about the process is that he doesn’t have to go through it.  To explain – he is stationed in a different state right now with the original plan being to be restationed here in a couple of years.  The kids and I did not go with him because the orders came down quickly and Ryland had just been diagnosed with Autism and had started his therapies.  We didn’t want to start the whole process over again so soon.  Also, Aidan was toward the end of his Senior year of high school.  The house, too, needs a lot of work done before it can be sold or even rented.  It was a mutual decision and I had thought we were strong enough as a couple to deal with it.  After all, we have been through so many more things that should have torn us apart already.  Looking back, I wasn’t fully thinking of him and his mental health – how he would handle being apart.

He’d like to say that I’m trying to be unfair – he has already insinuated in an email that he thinks I’m going to basically take him to the cleaners.  (He used another term that I’m not going to share here.)  I wish I could – I really do – in a way he deserves it, but I can’t.  It’s just not in me to be spiteful and vengeful.  I’ve been told that I’m being too nice and that I’m not asking for my fair share, so I’ve left that part to the lawyer for now.  I really could rake him over the coals if we went to court, but I’m trying to do this amicably so that the kids don’t have to see us go through a court thing.  They are already trying to deal with it the best they can.

Paix is angry.  She’s too much like her dad.  Her anger is basically proportionate to her level of hurt.  And she’s very angry.  I don’t know how to help other than to say that her dad loves her and he’s going through his own stuff right now (which I hope is true).  Her first real comment was, “Well, it’s not like he’s ever here anyway.”  That made me cry.  Aidan is much more complicated.  His first reaction was that he was never going to see his dad again so wanted to go visit him pretty much right away to say goodbye.  He also was concerned about our financial status.  He immediately started looking into extra scholarships when I told him.  He’s not really sad or angry.  I’m chalking it up to his Asperger’s – it makes him tend more to the intellectual side of things rather the emotional.  He and I have had to have a few conversations about this because he feels a sense of guilt for not being more upset.  I’ve explained to him that he’s normal for him – that he’s wired a little differently than the emotional girls in the house.  That if he were younger it may be a different story.  This has seemed to make him feel better.

As for me – I’m doing okay considering, I guess.  There are fewer crying fits than there were in the beginning.  It was nearly constant for a few days.  I still miss him – still love him.  It’s hard.  Now – as I said earlier – I think I’m letting the hurt turn into anger simply as a way to deal with all the emotion.  It makes functioning a little easier.  Not anger toward a person.  Mainly just the situation.  I don’t want things to be like this – I never wanted any of this.  I just want it to be over so that I can move on with a new kind of normal.

A new kind of normal.  I’ve had to do a lot of that over my life so far.  This is just another part of the adventure I suppose.  My prayer is that God will continue to support me and carry me through this – that one day I will be able to put all this pain behind me and find some kind of joy again somehow.  Some day.