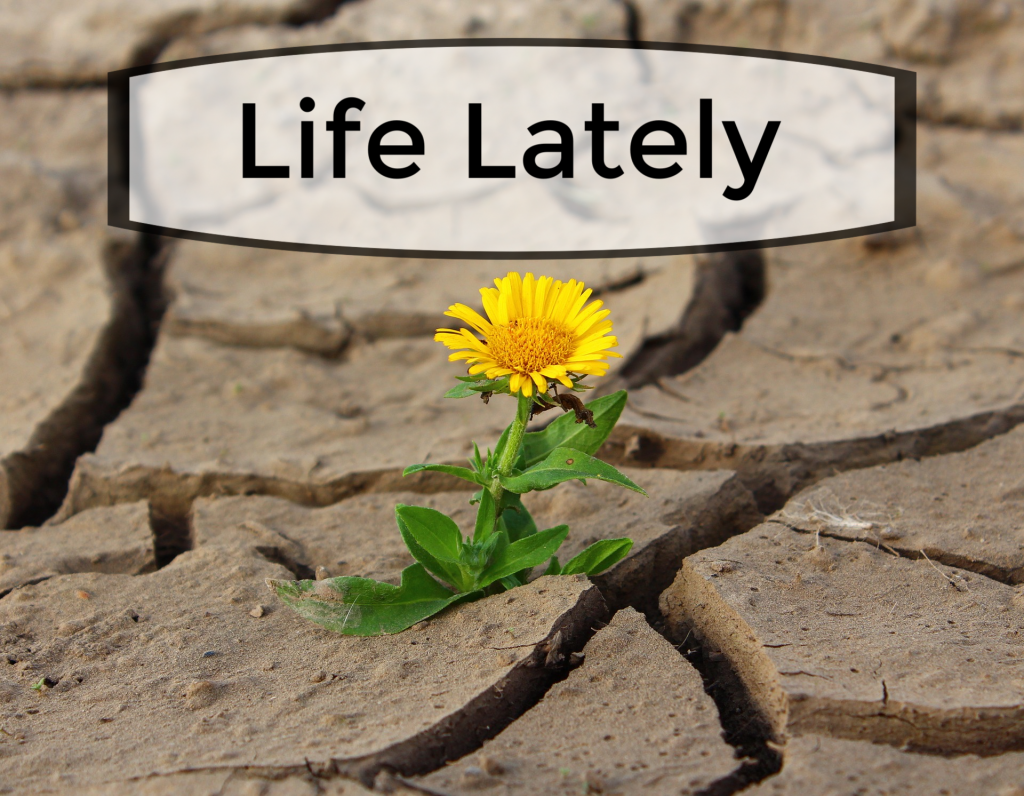 It has been a while since I’ve sat down to write for this blog.  I’m still trying to deal with and work through everything that has transpired over the past few months.  I’ve tried many tactics to try to keep my sanity in check.  A couple of weeks was spent working on the house with help from family that came to visit.  Then came the crash of all the work being done and there being nothing else to do.  Thankfully Stranger Things season 3 had come out so I binged that which started the binging of other shows I hadn’t been keeping up with that had released new seasons.  I’m a Marvel junkie when it comes to Netflix.  Jessica Jones, Daredevil, Luke Cage, The Punisher – it’s hard for me to get into The Iron Fist though.  Not sure why that is.  Anyway – these things took over reading every spare moment.  Think I need to get some balance back into my world. 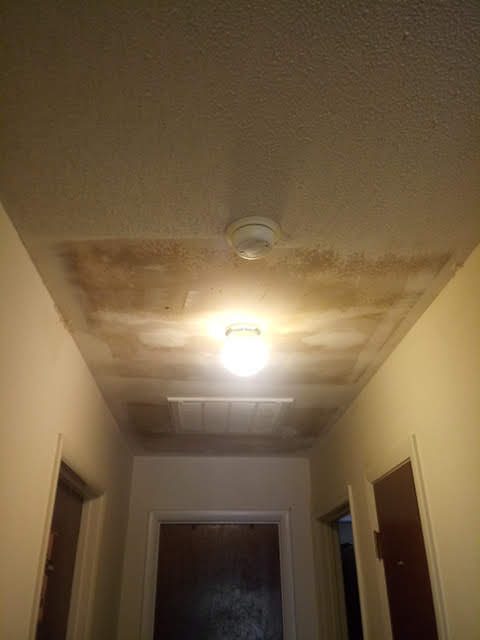 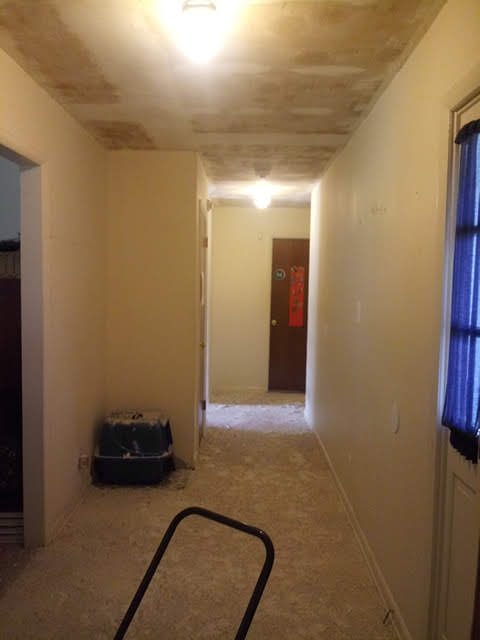 Working on the house took longer than I had planned but, in the end, I love the results.  We took the popcorn off the ceilings in the hallway and foyer – that took the longest.  It wasn’t the actual scraping of the popcorn it was the spackling and sanding afterwards.  I’m a perfectionist when it comes to such things and it all had to be just right before we started painting.  When we finally got the ceiling done, I worked on the walls.  Had hoped to get scrape the texture off the walls in the hallway but I couldn’t even get it started.  The house was built in the late seventies and all the walls except for the bathrooms, kitchen and foyer are textured at the sheetrock level.  It’s not a textured technique with the paint but actually done with drywall compound.  In the three bedrooms we’ve already done, we were able to scrape the texture away just like we did with the popcorn ceiling.  For some reason though, the hallway was not as easy.  I decided to skip it altogether and leave it textured.  I may go back later and try again, but when I started scraping nothing was coming up even remotely easily – 10 minutes on a three-inch square area.  Not worth the hassle at the time and I really didn’t have the time to deal with it because the whole project needed to be done by a certain time so that new flooring could go down in my kitchen and foyer.  After deciding to leave the hallway walls textured, we got to painting.  All the walls throughout the house were an antique white when we moved in.  I’m slowly but surely making sure there is some sort of color in all the rooms now.

While working on all that we also got some much needed landscaping done in front of the house with help from my mother.  I usually kill plants, so I was nervous about planting any kind of flower, but mom was a huge help.  We pulled up all the weeds from the area (because that is basically all there was there), laid everything out and got most of it planted before mom had to leave.  We got the rest of the planting done as my father, stepmother and brother came to visit.  They also helped with the mulching.  Overall, I love the end result.  Still need do a little more landscaping on the very front of the house, but it looks a whole better than it did. 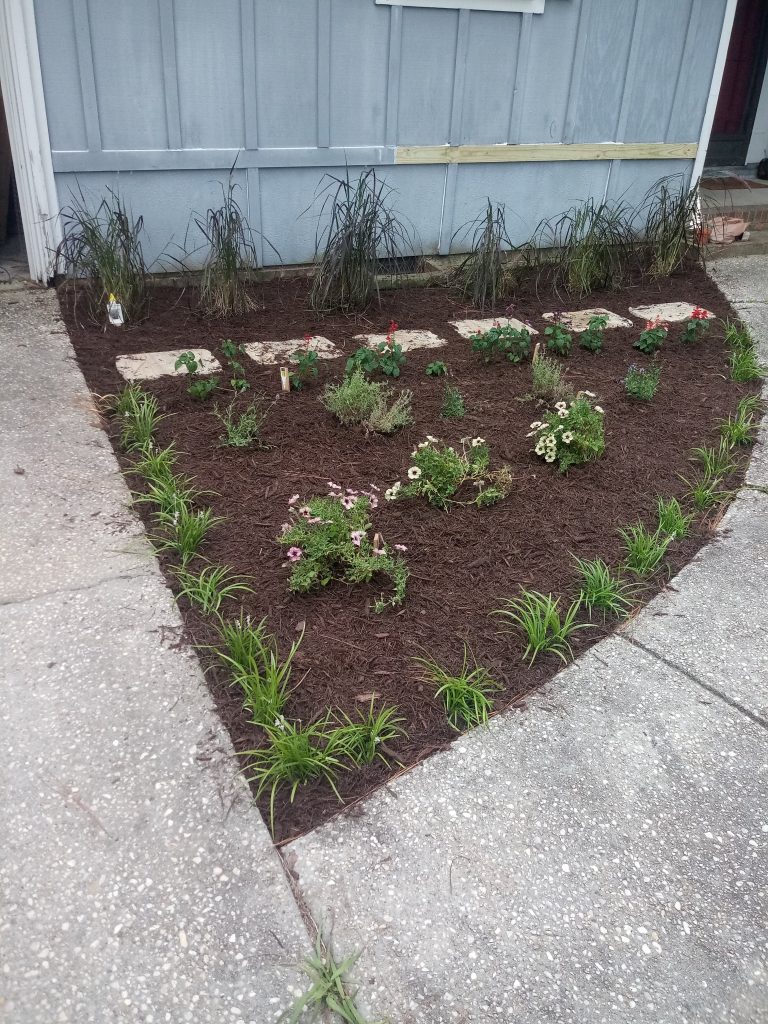 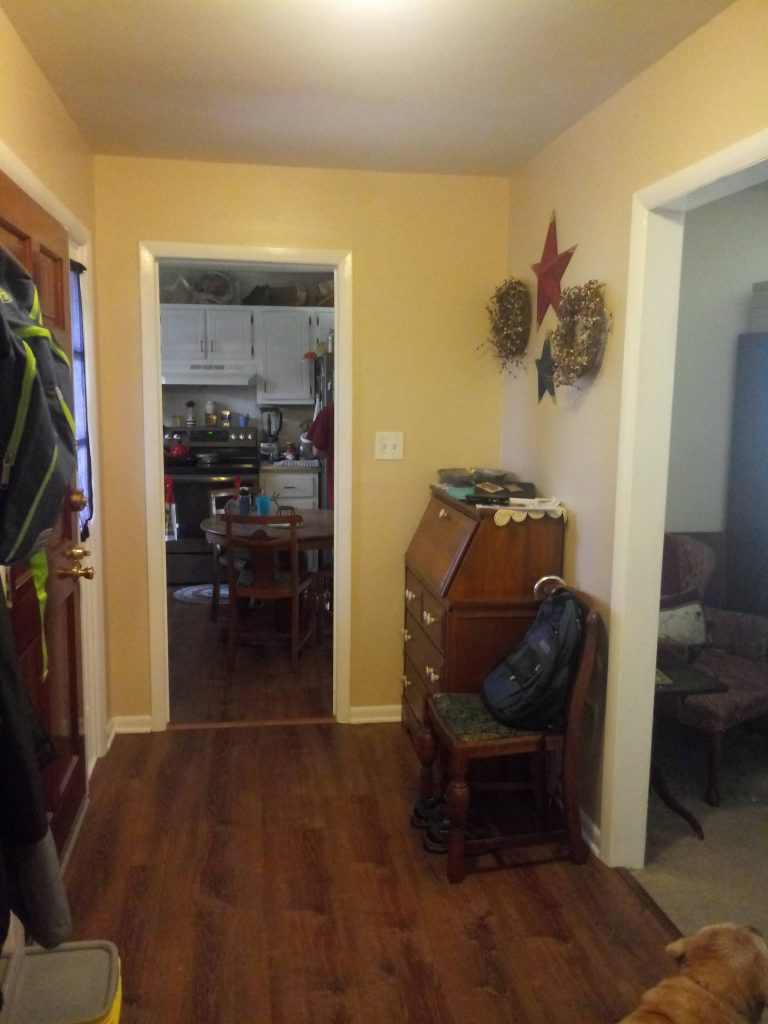 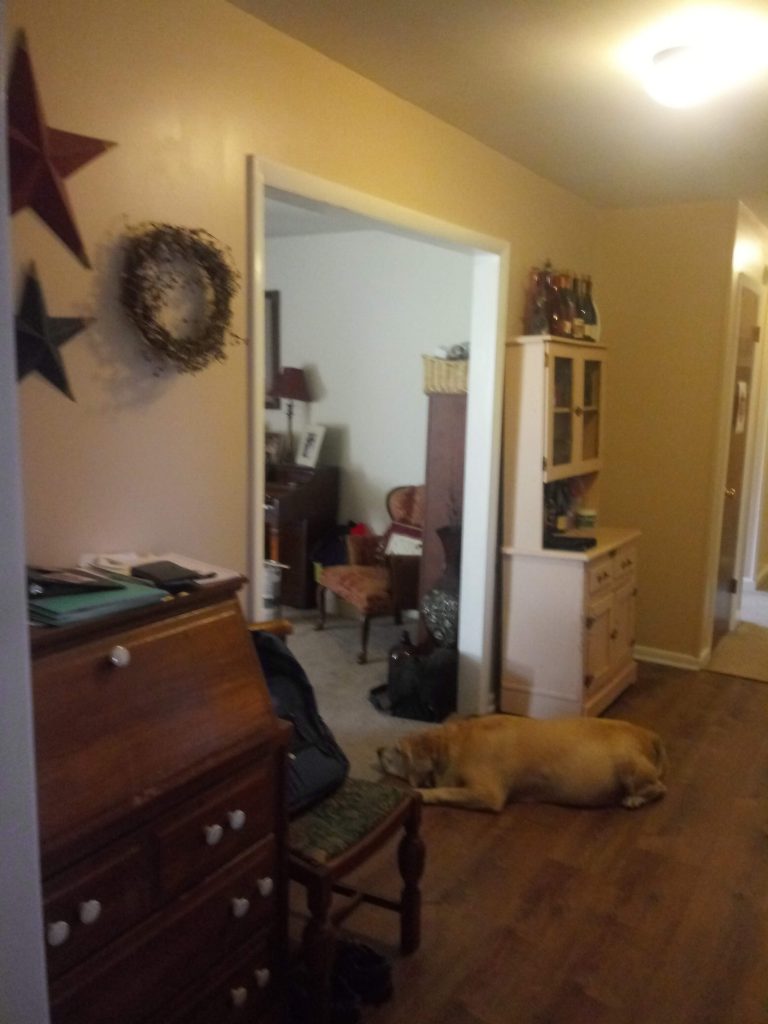 My brother and dad laid the new flooring in the kitchen and foyer.  It looks amazing.  Because it turned out so well and we ended up with an extra box of flooring, I have decided that we are going to do Ry’s room with the same stuff.  Hopefully that will happen the next time my dad comes to visit around Thanksgiving.  I’m excited. 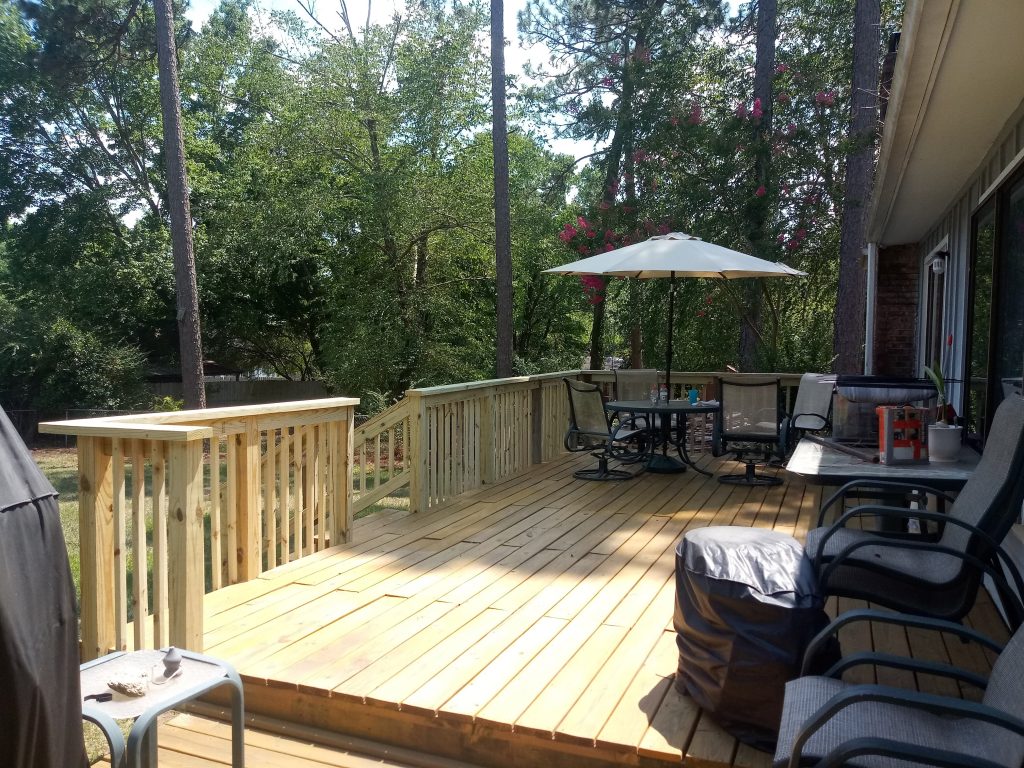 My dad and brother also did several other fix-it jobs around the house.  I now have a deck railing in the back that has been missing for a couple of years.  They also fixed some places around the outside of the house that needed tending to like some rotting spots on the soffits and some cracked boards along the siding.  I still need to paint those areas, but it has been so hot here recently with severe heat advisories in effect that I’m holding off for a little bit.  Probably shouldn’t but it’s going to have to do because this girl isn’t working in the sun recaulking and painting, sweating her butt off praying I don’t have a heat stroke.  I’m waiting for a day or two when the weather is a little less humid.  North Carolina is a killer, y’all!

So, as you can see there was a lot of activity going on around here for a couple of weeks.  After all that ended, things kind of crashed for me.  I had poured so much energy into working on the house as a distraction to the pain I’ve been feeling that when it was over it was like hitting a brick wall.  I sort of shut down – physically and emotionally.  That’s when the Netflix binging started.  It was a way to keep me out of my room and out of my bed.

I’ve slowly been coming out of that extreme funk.  I’ve been working on trying to focus on the here and now without worrying about the future or reminiscing in the past.  I have let myself start to understand that I am probably more broken than I have ever been in my entire life, but that I am also healing.  And that takes time.  It can’t happen overnight, and I need to be patient.  Normally I am a very patient person but for some reason I am not so much when it comes to dealing with the divorce.  I want it all over with and I want to be ok and happy again – now!  Not on some future date, but right now!  If only life could happen like that.

As far as the actual divorce – things are dragging along.  The lawyers are taking their time figuring out what step to take next for each of us.  I was hoping to get a separation agreement done without going to court but that is not looking like it is going to happen at this point.  It’s disappointing.

As I said earlier, I am trying very hard right now to focus on the present.  The kids and I are starting to have family meals again instead of disappearing into our own rooms with plates or fast food take out.  We are starting to plan outings together – not necessarily all together yet but Aidan and I will go somewhere then Paix and I will go somewhere.  Paix and Aidan are even hanging out together more.   We have even restored family movie night complete with pizza and sometimes popcorn.  I am still trying to find free activities that we can do with Ry.  It’s challenging to find something close that he can tolerate for any amount of time.  He is super sensitive to heat so nothing outside right now because of how miserable it has been.  I’m thinking I’m going to spring for a trip to a museum up in Durham soon.  We’ve been there before and all loved it, so I may suck it up and pay for another trip.  We need some good full family time fun.  We are due.

Aidan and I have also started doing a yoga workout program that I had purchased ages ago with every intention of starting but never getting around to it – until now.  It’s nice that he is doing it with me as it keeps us both motivated to stick with it.  So far, I’ve found it to be very helpful physically and mentally.

Working to keep myself focused and centered has been my goal lately.  I’m going to get back to writing here again.  Get back to some kind of routine for all of us.  Summer can be so hard with routines.  I truly like school time better – there is more structure.  It’s easier to stay busy for some reason too even with all of Ry’s therapy appointments still being the same.  I will be better one day.  I will have a life again that makes me happy regardless of what is going on around me.  This is what I pray for every day.  This is what I’m working toward.  It will happen – eventually.  It can’t help but happen if I work for it.