Hate to start this blog on such a serious note but things will get better.  They always do.   We have just been through one of the worst hurricanes to hit North Carolina in decades – Hurricane Florence.  We were blessed enough to make it through relatively unscathed.  Just a few small branches and power outages that lasted less than 24 hours.  Far better than some of our friends and thousands more across the state.  Being trapped in a house for days on end waiting for your power to go out or a tree to come crashing through your roof at any moment can really bring out the best and worst in yourself and those in the house with you.  You also have way too much time to think.  When you live with depression, days of rain do not promote a cheery disposition.  I tried by counting the blessings and believe me – having power while other friends were without power and sewage can put things into perspective.  Still, it was hard.  Too many bad things could still happen – too much could still go wrong. I was glued to the radio and couldn’t sleep even when the worst had passed.  This hurricane lasted DAYS!!  Granted, by the time it hit us it was just a tropical storm but still if you watched the news at all our city was mentioned.  It hit us hard.  To say that we were trapped indoors is no exaggeration.  We all went a little stir crazy – well crazy in general.  Except for Ry – amazingly enough.  The boy who never sleeps slept through the worst of it.  Two days of the worst of it!  Gotta admit it did help with the stress factor though.  Aside from peaking in on him to make sure he was still breathing that is.  One time, I almost poked him with the broom before he finally moved an arm.  Once he did return to the land of the living, the power was out so Paix entertained him with his very own private rave.  This was really just spinning her small flashlight strap around her finger while making disco noises.  “Nnn-t, nnn-t, nnn-t”  He enjoyed it enough that it kept him happy for a while afterwards. 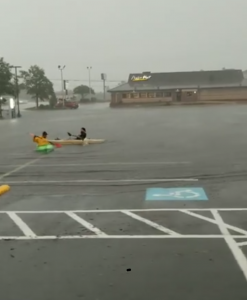 We all dealt with the stress in our own way.  My other son, Aidan, has a near paralyzing fear of trees falling ever since one almost fell on him while clearing some land on my dad’s property.  Storms are super stressful for him, so a hurricane?  Yeah – he was convinced someone was going to be crushed by a tree coming down.  It didn’t help that Paix kept announcing how many trees she’d seen fallen in pictures online or that she kept standing at our sliding glass door commenting on how much the trees were bending in the wind.  In her defense though, she did try to smooth it over by telling him that based on the wind direction she had calculated the trajectory of the trees if they did fall and that none of them would hit the house.  She’s got a heart of gold, that one.  He’s gotten better at coping with this fear (and others) through therapy, but the level of alertness during storms is always heartbreaking for me to watch.  He spent a lot of time engrossed in his phone or handheld games with his headphones on.  If ya can’t hear it or see it, why worry about it, right?  My dear bi-polar daughter, Paix, was on a manic high for most of the time insisting on playing marathon rounds of Pay Day. (Does anyone remember that old school board game?  If only real life worked like that!)  Sometimes she is a genius without even knowing it.  We all concentrated on each other during these times and not the misery around us – we laughed and poked fun at each other.  Most of the time the kids ended up accruing a mass fortune while I was struggling month to month.  Totally not fair.  It was a great distraction though.  But as so often happens – the moment passes and then you are left with yourself again.

Now that the danger is over and we’re able to breathe again, the whole world seems to crash.  Now what?  What do I do?  We can’t really go back to “life as usual” because there are still school closings and road closings and people in shelters and empty shelves at the grocery store.  So … what?  I think and for people like Paix and I, it’s not always good.  She’s gone into depression mode and has had anxiety attacks over practically nothing.  It’s like that for people like us.  We get up and move around.  We do what we have to do, but in reality we aren’t getting anywhere.  While most people are cleaning up their yards and moving on, we’re just here in limbo. Waiting to see what comes next.