Paix and I were just talking about how the bad thoughts can stop you cold.  How they tell you that you can’t beat your mental illness so what’s the point of even trying.  I went years without being medicated – YEARS!!  I was in my 40s before I began taking medication for my depression. How did I make it so long?  After my first major depressive episode, I swore to myself that the black hole would no longer win!  I promised myself that I would no longer believe the lies it would whisper in my ear that made me feel worthless and hopeless.  In essence, I declared war on my own brain.  Every time one of those negative thoughts would sneak in, I would either counter it with a positive one or simply remind myself that it wasn’t true.  Surrounding myself with positive, upbeat people became a priority.  Limiting time with or even totally cutting myself off from friends and even family was something I had to do in the beginning.  It was hard – in some cases heartbreaking, but it had to be done for me to get full control over what my brain was trying to tell me and what I knew it should be.  Every day became a game of who was going to win for the day – me or my brain.  It’s a tactic I still use to this day.  Some days are better than others, of course.  But there are far more better days than not now.

Over the years I have learned that this approach works when dealing with almost anything in your life trying to stop you from being happy or from being everything you can be.  Any time your brain tells you that you can’t do something, it lies.  Now I don’t mean if your brain tells you that you can’t fly, you can will yourself to take off like superman.  But you can take flying lessons – in a plane or helicopter!  This is the part that tripped Paix up a bit.  She kept arguing with me – telling me it wasn’t that simple.  In a way, she’s right.  Just because you tell yourself you are capable of good things, better things, doesn’t mean it happens overnight and you still must do the work to get there.  And there is the rub of it.  Too many people call “positive thinking” garbage because they don’t realize that it goes deeper than just thinking.  It takes action.

‘Fake it ‘til you make it.’  We’ve all heard the saying.  Professionals may liken it to cognitive behavioral therapy.  When it comes to my mental illness and overcoming it, that’s exactly what I’ve had to do m 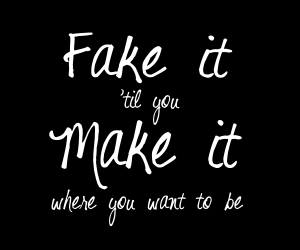 ore often than I can relate.  On the bad days I pretend – fake being ok.  Tell myself, sometimes scream at myself to keep putting one foot in front of the other in order to do the things I need to and especially the ones I want to do.  (‘Just keep swimming’ is another one that comes to mind.)  Now, here’s another place people can get stuck and screw up.  I got stuck in this way of thinking and it nearly killed me.  All this faking and pretending doesn’t make the mental illness go away.  It doesn’t mean you don’t need help.  That’s ignoring the problem altogether.  Instead it is meant to be a means to an end goal – a positive, productive life.  Fake it ‘til you make it where you want to be.  There was a time when I had been faking the funk for so long that I had forgotten why I was doing it in the first place – had forgotten it was a tactic and not a lifestyle. Then when life really got stressful, I refused to reach out for help.  Refused to admit I was having issues.  It wasn’t until I couldn’t stop crying that I relented and went to counseling as well as started half-heartedly taking medication.  (Meaning that I started taking medication and then quit a few months later after getting the flu.  I was feeling better and didn’t think I needed it.  Big mistake!)

I’ve said all of that to say this – don’t let your brain lie to you!  You are capable of anything – mental illness or not!  It’s all about reprogramming your brain and moving forward – one day at a time.  Sometimes one hour at a time.  Progress and change are possible!  My family is living proof!  So take that step.  Be the change in your own life.  Then share that change with others – tell your own story so others know the truth.  Reach out, ask for help.  Don’t be afraid of the doctors or medical side of things.  Above all else – BE HONEST!  Especially with yourself!  As I said before, none of this is easy.  I still struggle some days (weeks even!) with fighting those awful thoughts that keep me from succeeding, but I try.  I try hard!  You can to!  I have faith in all of us!

2 thoughts on “Fighting the funk and winning”