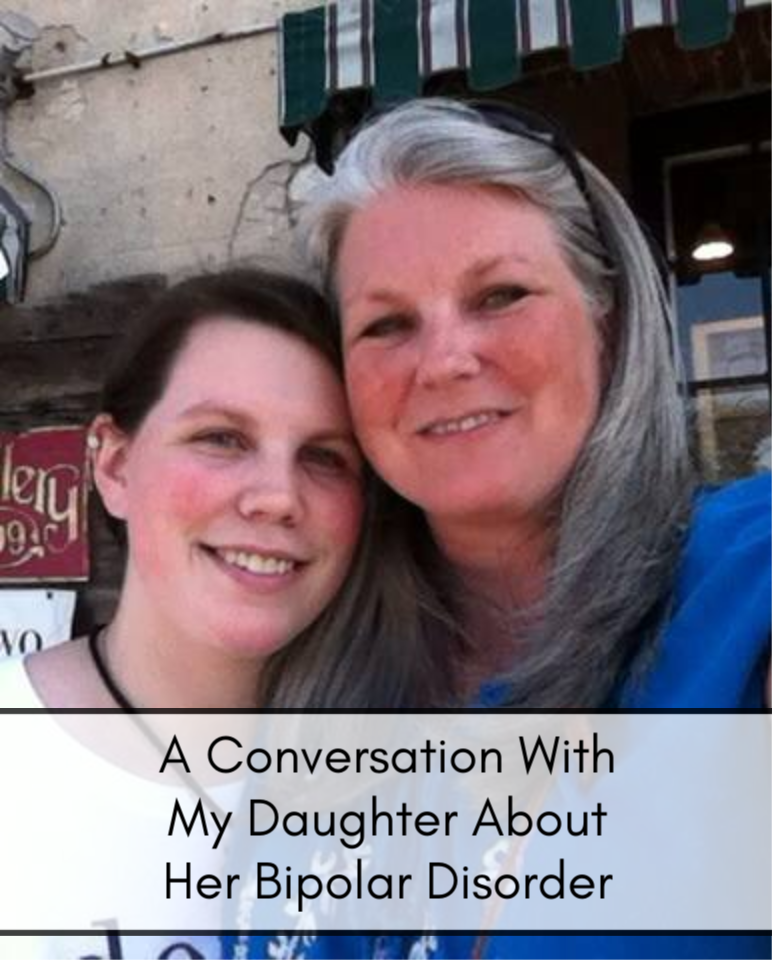 Recently I sat down with my daughter, Paix, and asked her several questions about her Bipolar II Disorder.  She’s had a really rough time over the past few years and I wanted to see what she thought about her disorder from her point of view.  It comes across as very dry and interview-y (if that’s even a word), but you get the idea.  I didn’t have the energy to write it up in a clever format.  Apologies.

When did you first start feeling like there might be a major issue with your mental health?

Ooo – The bipolar was a slow process for me.  It wasn’t until I was in college that I realized something was very wrong.  Even then I didn’t know what it was.  I think it started in high school though because of all the stress.

You were diagnosed with Bi-polar II with psychotic features.  What does that mean?

It means lethargy and sensitivity to stress.  With like 2-3 days out of the month where I have any energy.  It stumps a lot of my creativity and hinders my ability to participate in and enjoy daily life.  The psychotic features portion is about thinking, hearing or feeling things that aren’t really there.  Of course, that’s me unmedicated.

What does it feel like when you are in manic mode?

It feels like a concentrated dose of adrenaline.  A comparison would be like taking all the illegal speed drugs out there in one hit.  Not that I’ve done those, but from what I hear about them that’s what it would be like.  The first day I’m manic is the perfect amount of the high.  I’m able to have the artistic drive and creativity that I want.  I’m able to clean and my thoughts are a lot clearer.  I’m able to function like a normal human being.  The second day of a manic episode is like drinking too much coffee.  I’m moving too fast and I’m over functioning.  Things don’t move as smoothly as they should.  On the third day, that’s when there’s such a build up and there is so much moving in my head that I need to just sit down against a wall and just wait.  It’s like a train station during rush hour.  There’s so much going on that you can’t keep up with it, so you have to wait for everything to pass.  Then the depression hits.

I think the depression part can be pretty clear to those of us who suffer from depression.  Is it the same thing?

Yes, it’s not having the drive to do anything and that makes you sad.  I try to find a reason to be upset – to make sense of why I’m depressed.

Um – a haunted house on steroids.  Not all the time, but sometimes.  It can range from overactive imagination to feeling things that aren’t real.  To figure out what’s real and what isn’t I go through a checklist.  Is it plausible for that thing or person to be there?  Does it look like something that could be based in reality?  Then I look around to see if anyone else is reacting to what I see or feel.  And then should I react or let it pass?  The only time I really react is when there is a chance that my wellbeing is in danger.

What difficulties have you experienced in having Bi-polar Disorder?

My social life – not being able to make friends or be proactive in a social environment.  School was so difficult that I had to drop out.  Career wise – I haven’t been able to advance my own skills in my art to make me and my stuff more desirable.  It can be too exhausting.  Making social connections in regular jobs has caused me to lose or be forced to quit several jobs.  It’s upsetting and makes me feel worthless.  At the same time though I could care less what people think.  I can’t change who I am.  I just wish other people took the time to understand.

How do you feel now that you’re on the right mix of medication?

Sooooo much better.  Everything has turned for the better.  I can sit and focus on my drawing.  I can enjoy my life.  I can make those social connections that have been so hard.  It’s like a whole different world.

After asking her these questions we ended up having a long talk about psychosis and what it meant.  I have been under the impression that those with psychosis don’t realize that what is happening isn’t real.  She explained that wasn’t always the case.  Psychosis comes with hallucinations and/or delusions.  Hallucinations include seeing or hearing things that others do not, while delusions are untrue beliefs.   After doing a little research together I finally came to understand that her type of psychosis falls into the hallucination category.  She does not seem to have the delusion part.  Which is good as far as the whole diagnosis is concerned.  She could be a whole lot worse off.

Reading about a diagnosis does not give a full understanding of what your loved one may be going through.  Engaging in conversation about it can help you get the full picture of what is really going on with your friend or family member.  I’m glad I had this conversation with my daughter even if it was more of an interview.  At least we were talking about it.  I love her and am so proud of her and her accomplishments.  Especially in dealing with her mental illness.