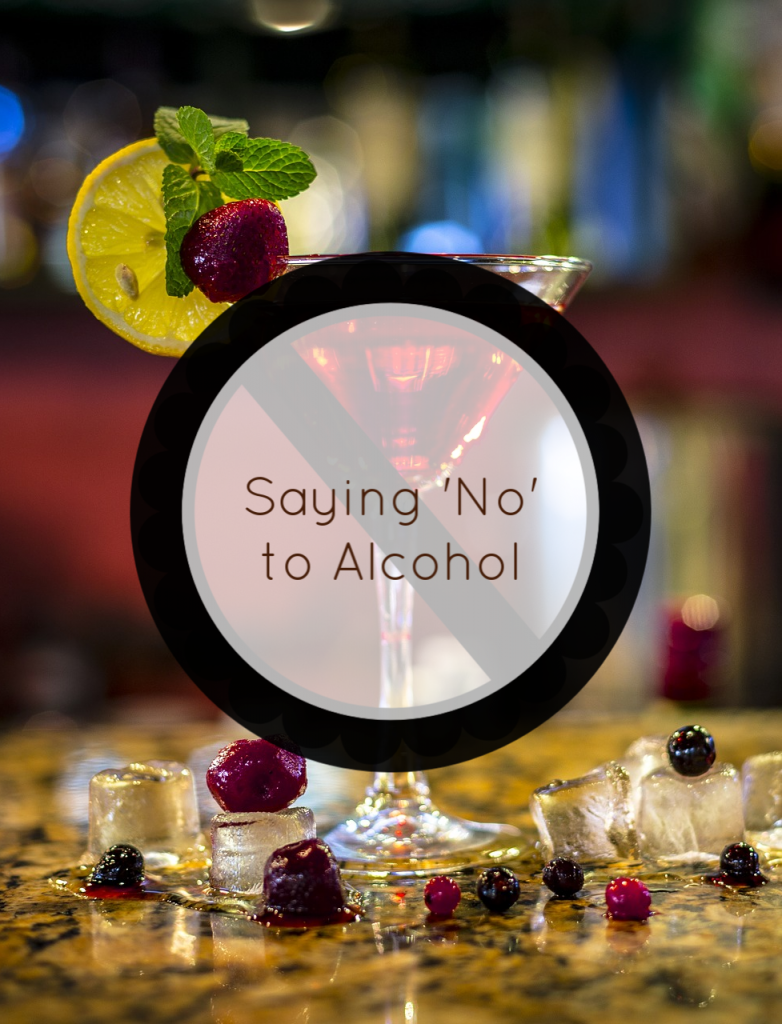 I don’t drink.  Not anymore.  Haven’t for a while now and I’ll tell you why – it’s a depressant and for a person who suffers from Major Depressive Disorder it should be a no-brainer to stay away.  For a long time though I didn’t realize that and put myself through hell figuring it out.

My first drink was when I was in 9th grade.  My mother received a bottle of Boone’s Farm wine as a gift and didn’t think the alcohol content was enough to do anything to me.  She was wrong and realized it as soon as it was obvious that I was feeling a little tipsy.  I enjoyed it but wasn’t allowed any more after that.  It wasn’t until my senior year of high school that it became a habit for me.  The depression had started to show its ugly head more often by that point and I didn’t want to feel that way.  Alcohol gave me brief times of feeling happy.  When I was drunk, I was happy.  I was a little off, but I was happy.  Little did I know that I was in a terrible cycle.  The more I drank, the more I needed to drink to keep the high going.  As soon as I’d sober up, the depression seemed to get worse and worse.  When I wasn’t drinking, I was popping whatever pills I could get my hands on.  I began cutting and burning myself during that time too.  Anything to make the hurt go away.

By the time I was in college, I was drinking nearly every day.  It got to the point that I would have to go to the student parking lot a good fifteen minutes before I needed to leave just so I could find my car.  This happened way more than once.  My drinking buddy at the time had been in AA before and convinced me to join her as she went back into the program.  It was the first time in a long time that I had to deal with myself.  It didn’t go well.

I need to say that throughout this time I didn’t know that what I was feeling was depression.  I honestly thought that I was just some kind of screwed up freak.  I knew that I would get down, but it never hit me that major depression could be the cause and that I could get help for it.  Instead I barreled ahead trying to “fix” myself my way.

If you don’t know anything about AA, there are some basic rules when you first get into the program to foster your journey to sobriety.  Sobriety being more than not drinking and more of a total life change.  I broke just about all of them.  It was strongly suggested that you not start any new romantic relationships during your first year.  I started dating a guy in the program who had about 6 months more sobriety time than me.  It turned out to be an abusive relationship where I was beaten on a couple of occasions.  It was strongly suggested that you get a sponsor (a sort of mentor in the program) the same gender as yourself.  My first sponsor was a man who ended up hitting on me.  By the time I had figured out that I should probably listen to what I was being told, I had put myself in situations that screwed me up even more mentally and emotionally.  I finally got a female sponsor who made me face my inner demons with love and support.  I stayed sober for two years.

After two years of working very hard on getting my head straight – as best I could – I moved back to my hometown and started dating my high school sweetheart again.  They say in the program that if you think you aren’t an alcoholic go ahead and start drinking again, and they’ll pray you come back before you die.  I began to think I wasn’t an alcoholic but instead was just mentally screwed.  Still believe that to this day.  I don’t regret my time in AA – I learned a lot about myself working the twelve steps.  It helped me face several of the bad parts of my life and accept them for what they were instead of what I wanted them to be.  The real truth though is that it was the depression that made me drink and not that I was addicted so to speak.

After I moved back to my home town, I did start drinking with my friends again.  It never got as bad as it had been when I had left but I began to notice that the more I drank the more often I would become depressed.  The self-harm that had stopped completely when I wasn’t drinking had returned.  I needed a way to get the bad feelings out.  It was at this time that I started to realize that it was truly depression and not that I was crazy.  I started referring to the black hole that would sneak up on me.  I still would drink from time to time, but I knew that when the black hole started to show itself that I needed to take it easy.  That actually worked for a while.  My boyfriend and I were good – even planning on getting married.

Then my life fell apart.  The relationship with my boyfriend started to crumble.  He was drinking more and more and started pulling away from me.  After ghosting me for almost a month he finally came over to tell me that he had never loved me the way I loved him because he was gay.  That was the beginning of my first major depressive episode.  I don’t remember anything from the next few months and stayed in a fog for the next couple of years.  I went back to drinking and popping pills.  Back to that vicious cycle.  Back to many poor decisions.

One of those poor decisions included a guy who I would have never dated in my right mind.  I ended up getting pregnant, but that was the best thing that could have happened to me.  My daughter saved my life.  Having her meant that I had to focus on someone other than myself.  She needed me!  I would still go out and drink from time to time, but I never went back to the way it had been before.

When my daughter was two years old, I started dating my husband.  After we got married and our boys were born, I pretty much stopped drinking all together.  I didn’t feel the need to and it was easy to just say no when it was offered.  Life was good again and I didn’t want anything to mess it up.

We had only been married five years when Eric was deployed to Iraq for the first time.  It was the beginning of his struggle with PTSD.  When he got back, he started drinking more and more in order to fight away his own demons.  He slowly got worse and worse.  And so did I.  My depression was showing itself more and more often.  The stress of dealing with him and his issues as well as my own got to me and I started drinking with him.  Again – not to the extent that I had before, but I was drinking more than I had in years.  During this time, I started seeing a therapist.  I had gone to the doctor for a checkup, started crying and couldn’t stop.  I was set up with a therapist and my first depression medication.

When you start taking medication for depression, you should get the “don’t drink alcohol while taking this” speech if not from the doctor then from the pharmacist.  I only halfway listened.  Even taking the meds I would still have a few beers here and there thinking I was all good.  I wasn’t.  Everything – my depression, Eric’s PTSD, the drinking – all came to a head when I decided to kill myself.  After my week-long vacation in the hospital, I realized that I had to do everything I could to fight against my depression.  That included not drinking at all.

I would be lying if I said I haven’t had a drop since then.  I have tried to drink a beer or have a mixed drink here and there, but since the hospital I have started to notice exactly how it affects me.  The next couple of days after having the drink are usually bad ones.  I either have no desire to do anything or I get weepy and flat out depressed.  Even Eric has started to pick up on the cycle.

Depression and alcohol don’t mix.  I’ve learned this the hard way.  Alcohol isn’t a part of my life anymore and I honestly don’t miss it.  There are too many other things in life to experience and be grateful for.