I’d love to say that I’m not afraid of anything and when it comes to basic fears, I’m not.  I’m not afraid of spiders or snakes or bugs.  I don’t jump scare easy either.  Most of my fears are deeper.  My fears are usually based in what could or could not happen in the future and the unknown.  Not knowing what may happen scares me the most.  All the possible outcomes of a situation can become very overwhelming for me.  Anxiety is not on my list of conditions, but like everyone else sometimes I do get anxious about the future.  The depression can make my brain think of all the worst possible scenarios which can undoubtedly scare me to the point of inactivity.  It can literally become paralyzing if it gets bad enough.

The worst part of the scary depression thoughts is how unrealistic they can be, yet I believe they are real.  Years ago, when I was as low as I’ve ever been, I would have thoughts that my own family and friends were against me.  Once a best friend of mine text me out of the blue to see if I wanted to grab lunch that day.  Immediately my brain told me that she and Eric were conspiring against me.  Their plan was to get me out of the house and then kill me.  It was absolutely absurd, but my mind would not let go of this idea.  I still went to lunch with her despite the fear I felt.  (I lived – just in case you were wondering, and I quit watching so much Investigative Discovery Channel after that.)  Part of me knew it was an irrational fear, but still, it was very hard to bury that fear and keep going. 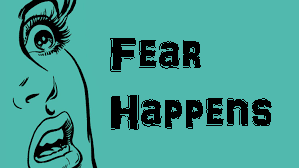 That’s where courage comes in.  Courage is being afraid and doing whatever it is anyway.  Never let anyone tell you that courage is the lack of fear.  Courage is the best that can come from fear.  Doing it anyway.  Facing the fear instead of letting it control you.  Whether it be a bug or a bungee jump – if you just do it, it can be extremely gratifying.  I’m not talking about phobias here – just general fear.  Phobias are a whole different can of worms.

My absolute worst fear is waking up one morning to find Ryland dead or worse gone.  I would love to think that this fear is unfounded and has no merit whatsoever, but, unfortunately, for parents of special needs children it happens.  I personally know of a few parents who have lost their babies in the night – either from choking or related to their conditions.  There are many nights I will wake up and just go check on him to make sure he is still breathing.  When he’s sick and sleeps a lot, I will literally poke him to make him move.  One night his cries woke me – it didn’t sound like a normal cry and he doesn’t cry anyway so it was alarming.  I went into his room and he had somehow contorted himself into the slats of his bed with his mattress on top of him.  He was folded in half and unable to breathe properly.  I nearly had a heart attack right then and there!  It took several minutes to pry him out.  He has never tried that again – thankfully.

As for Ryland just being gone – he’s done that too.  One summer night our air conditioner went out and we had opened all the windows in the house.  We had only cracked Ry’s window for fear of him escaping, even though it was a 10-foot drop to the ground from the window sill.  The fear was founded.  About 12:30am we were awoken by pounding on our walls and front door.  It was our neighbors across the street.  Thank God they were up and happened to go outside!  They found Ry roaming around in their yard butt naked!  Yes – he had opened his window the rest of the way, pushed through the screen and dropped himself to the ground.  What on earth had ever possessed him to do such a thing, we will never know.  Another one of those times we really wish he could talk to explain himself.  So, my fear of him being gone one morning is not in the realm of fantasy.

Ry actually has disappeared before – a few of times.  Usually because someone left a door open.  Once I even had to call the police because we couldn’t find him.  It was one of the worst days of my life.  Three hours later an officer located him in our next-door neighbor’s house playing with knives.  They had left their back door unlocked.  Apparently, he loves to visit neighbors.  As he’s gotten older, his need to wander has thankfully diminished, but there is always that chance.  Only a month ago there was a young, autistic boy on the news who had gotten away from his father at the park and was found a week later dead.  It happens, and it is terrifying to think about.

Faith is another way to fight fear.  Having faith that everything will turn out as it is supposed to.  I have a great amount of faith – in God and in the natural order of life.  Everything happens for a reason.  Having faith in the face of fear breeds courage.  After everything we’ve been through so far as a family, there is no way I would have made it through without my faith.  With all the unknowns we face, with all the changes and chaos that happen in our lives every day, my faith gives me peace through the darkest times.

Even this blog was a leap of faith.  I was fearful to start it.  Afraid of failure; afraid of success.  Frightened that no one would ever read it; frightened that too many people would.  It took me two years to actually take the plunge.  Now that I have, I wish I hadn’t let the fear win for so long.  I love sharing what I can with all of you in hopes that you can relate in some way or take some sort of lesson or bit of strength away from the stories.

Fear happens.  It’s what we do with it that matters most.  Will it control you or will you control it?  Will you have the courage and faith to keep going no matter what?  We aren’t perfect beings so sometimes the fear wins for much longer than it should, but that’s ok.  As long as we push through in the end.  Living in fear is not living.