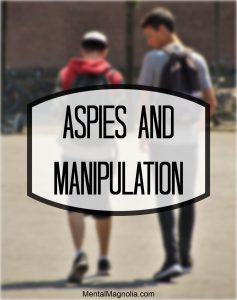 Autism is a funny creature.  Having two sons with autism has taught me first hand just how different it can affect each child/person who has it.  Aidan is at the high functioning end while Ry is at the low functioning end.  Ryland gets most of the attention as his condition is more severe, but Aidan has his own set of struggles.

As Aidan was growing up, social interactions were awkward for him and one of his biggest hurdles.  When he was in third grade, we signed him up for Cub Scouts.  It was one of the best decisions we ever made in order to help foster his social skills.  The other was allowing him to go on an EFTours trip to Greece and Italy with other students in his high school.  It opened his eyes to just how big the world really is and boosted his confidence in navigating his way through it.

Our main concern with him now is that he can be easily manipulated.  A 2014 survey conducted by the National Autism Society in the UK showed that nearly half of the 1300 people with autism they talked to reported that they had been abused by someone they considered to be a friend. Just about a third stated that they had money or possessions stolen and 37% said they had been forced or manipulated into doing something they didn’t want to do by someone they thought of as a friend.  Our concerns are valid.

Like many other Aspies, Aidan is such a kind and generous guy that he doesn’t like to say no to anyone.  While in high school we had one situation where a fellow student was getting money from him by simply asking him for it every day.  We had to explain that it wasn’t appropriate to give so much just because someone asks.  Yes, we should help people when we can, but there comes a point where it isn’t helping, it is enabling.  Once he became a senior in High School and started looking at colleges, we realized just how seriously this could impact his adult life when he is out on his own.  College is such a different world than high school.  It is a time of big changes and can be a scary transition for even typical teens.  Throw in the atypical teen and things could get real complicated real fast.  We made the decision that he should start college locally before going off to the university of his choice out of state.  Call me a helicopter mom for that if you must, but the last thing I want is for my boy to be miles away and not realize that he is being taken advantage of.

Like most kids with autism, Aidan needs structure and relies on everyone following the same rules.  He assumes that most people are as open and honest as he is.  And let me tell you – if you’ve ever been around someone with Asperger’s, they are about as honest as they get.  They have no qualms telling you exactly what they think about a person or situation – think Sheldon Cooper from Big Bang Theory.  But Aidan falls short of picking up on cues that a person may not be exactly on the up and up.

Not long after starting college at a local university, a situation arose that again gave us validation that we had right to be concerned about his proclivity to being taken advantage of and how dangerous it could really be.  Aidan has been in marching band since his freshman year of high school and working toward a music degree it was only natural that he continue with marching band in college.  Practice, however, would run much later than during high school.  He would not get home until nearly midnight some nights.  His university is very close to one of the worst areas in town.  One night after practice on his way home in this bad area, he was approached by a man who wanted a ride while he was at a stoplight.  Aidan, the kind and generous soul he is, agreed.  During the ride the man then asked for money.  Again, Aidan agreed and gave him all the cash he had on him which amounted to nearly $40.  Because he was exceptionally late getting home, I had asked him what took so long.  When he told me, my veins turned cold.  We had to explain to him that he put himself in a very dangerous situation and that he was very lucky that he came out of it safe and unharmed.  Teaching him that not all people are trustworthy has become a priority.  Again, you can see, we had every right to be concerned about his step into the adult world on his own.

Aidan’s sister, Paix, has unknowingly helped us teach him how to say “no” since moving back home last fall.  Paix has a strong personality and likes to get what she wants, when she wants it.  Being his big sister, Aidan has always followed her lead usually without question.  Yet over the past few months, he has slowly grown to understand that he doesn’t have to do everything she says.  Sometimes she’s wrong.  And miraculously, he has been telling her “no” more and more.  She wants some of his money, he says “no” or immediately set up a repayment plan.  She wants him to go someplace with her and he doesn’t want to, he says “no”.  She wants him to do a chore that she doesn’t want to do and he’s not in the mood to help, he says “no”.  Seeing this in the home allows us to breathe a little easier about how he will react outside the home.  I mean – if you can tell your own overbearing sister “no”, saying it to anyone else can be a lot easier.

We have taken seriously the dangers of Aidan being manipulated and are now taking steps to make sure he’ll be ready when he does leave home.  This includes more conversations about trust and honesty – reiterating that not all people can be trusted and how to tell.  We also encourage his healthy relationships.  He does have a small group that he hangs out with.  Most are socially awkward themselves, so he fits in well.  We talk about those friendships and how he handles different situations that arise within his group.  Basically, we communicate with Aidan.  I’m hoping that when he does leave home, we will still be able to have these kinds of conversations.

One thought on “Aspies and Manipulation”